Islam Will Be The Death Of America

Islam will continue to wrap itself around America like a spider preparing a trap for it's next meal. When the end game comes, we will feign shock and outrage.... 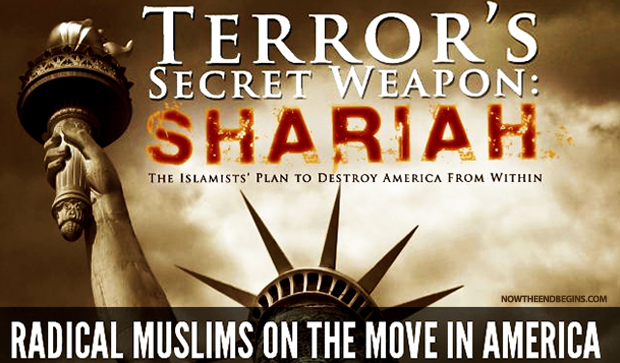 Sharia Law is coming to America

“And he will be a wild man; his hand will be against every man, and every man’s hand against him; and he shall dwell in the presence of all his brethren.” Genesis 16:12

Despite what you have been told, Islam is not a religion. Islam is an ideology. It is a system of control and dominance. It is based on brutal conquest, horrific bloodshed, and a ruthless, forced submission to Sharia Law. Islam’s adherents are made to follow strict orders and if not, then beatings, rape and murder swiftly follow. Women are treated on the same level as the family dog, and oftentimes quite a bit lower than that.

The god of Islam, the moon god Allah, is to be obeyed at all costs, as is his prophet Mohammed. Like the prophets of Baal in the bible, Muslims love blood, and they don’t really care whose blood gets spilled. Have you ever seen a Middle Eastern parade that revolves around slicing yourself open with a sword to prove your love to Allah? What type of god would require that from his followers? Take a look at the Muslim “holiday” of Ashura.

The word Ashura means 10, and the holiday is the tenth day of Muharram, the first month of the Islamic calendar. Like everything else associated with Islam, it is violent, bloody and repulsive to observe.

WARNING: Extremely graphic video, watch at your own risk!

Muslims celebrate the day by fasting, flash mob rioting and cutting themselves – self flagellation – until they are soaked in their own blood.  If they willingly do that to themselves, what do you think they are capable of doing to you?

“Just another religion”, you say? Islam is a “religion of peace”? You must be insane.

The book that they use to support this demonic behavior is called the Koran, and it tells them to kill in the name of Allah. It tells them that the Jew is the enemy of the Muslim, and must be destroyed. All Muslims read the Koran, so-called moderate ones included. Just because a “moderate” Muslim is quiet and not showing any outward signs of violence, they fully support and endorse the ones doing the actual killing and bloodshed. The ones that do speak out comprise less than one tenth of one percent of Muslims worldwide. A meaningless number of people making whisper-quiet protests heard by no one.

Day after day, led by a president that is constantly praising Islam, America is being overrun with the Muslim culture. We have lost our collective will to isolate and reject such evil, so we have allowed it to come in in the hopes of making friends with it. But the tiger will not stay in the cage. In city after American city, Sharia Law is being pushed and accepted. Where Halal food signs were once limited to the inner ghettos of the larger cities, they are now popping up everywhere. Halal food is mostly meats that have been sacrificed to idols in the name of Allah, and blessed by demons. 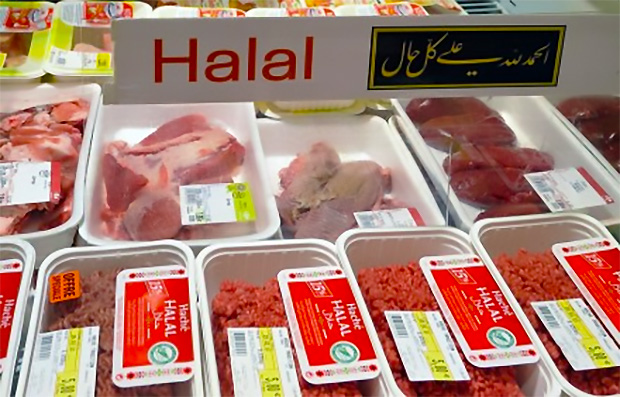 Mosques are beginning to dot the American landscape as far as the eye can see. Far-flung Alaska just built its first mega-mosque for a congregation of over 15,000 square feet. Biological jihad, so effective in England, is being fought in every American city bar none. We have opened the door and allowed them to come in, all in the name of “religious freedom”. But Islam is not a religion, and it’s mosques are training centers for terrorism.

The Islamic State has now become the ruling power in the Muslim world. The brutal beheading of James Foley on Tuesday was just another day at the office for ISIS & Company. Every day their power grows, and their coffers overflow with blood money. Right now, they could be stopped very easily with Allied airstrikes until they ceased to exist. But will that happen? Sadly, it will not. A few token efforts will be made, but ISIS will not seriously be impacted. They know that America under Obama does not possess the will to do what Ronald Reagan would have done, what George Bush would have done, what even Bill Clinton would have done.

No, Barack Hussein Obama is on their side, and they know it. A president who cannot stop his golf game while the world burns is certainly not a president who can order decimating airstrikes on ISIS. So their grip on unlimited power grows daily.

Islam will continue to wrap itself around America like a spider preparing a trap for it’s next meal. In the name of religion we will continue to tolerate it, and allow it to take deep root in our society. When the end game comes, we will feign shock and outrage. We will run naked and bloody through our own streets, screaming “who let this happen?”, while all the while knowing it was us who did it to ourselves. Make  no mistake, the Middle East is coming to America. That’s the plan, that’s Obama’s dream for America.

Islam is not a religion, it is an ideology of death and destruction. It will be the death of America