Is Facebook Using Their Celebrate Pride Tool To Identify Anti-LGBT Users For Persecution?

Critics warn that the Celebrate Pride tool may be another psychological test by Facebook, and even worse, that it could be tracking those against the LGBT Movement.... 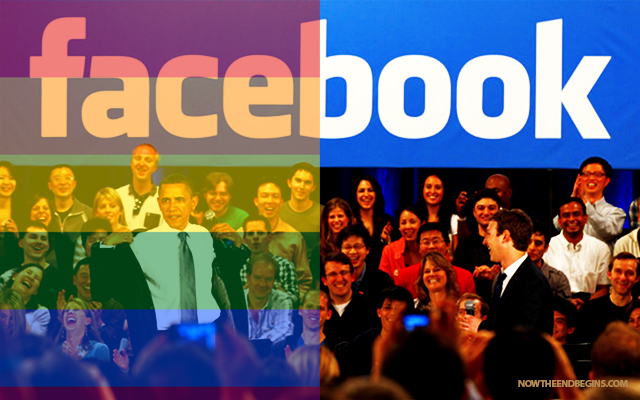 In celebration of the Supreme Court's approval of same-sex marriage, the site is offering users a tool to overlay their profile photos with a rainbow filter. But some people, such as MIT network scientist Cesar Hidalg, say the social network is carrying out another psychological test on its users
by Geoffrey Grider June 29, 2015
NOW THE END BEGINS SHARE:

EDITOR’S NOTE: A Facebook spokesperson didn’t deny that the social network was tracking which users support gay marriage and adding that to the database of personal information the company has on its billion-plus users. It is the opinion of NTEB that this information will be shared with various government agencies to enable the targeting and persecution of all those who oppose the LGBT Mafia’s agenda.

For a website that started because some drunk college geeks wanted to creep on their female classmates, Facebook has evolved into an ultra-slick, end times tool of the government. To me, their various social and psychological “experiments” evoke images of Joseph Mengele and disgusting petrie dish of human tampering that was Auschwitz. But I think it’s more than just cataloging stats and user preferences to sell to their advertisers. I think Facebook is a major end times player, and the information they are collecting will be used against Christians from the deepest levels of DARPA and other black ops groups. You should be more afraid of the rainbow flag of the LGBT than you should be of ISIS, but they both end the same way.

‘This is probably a Facebook experiment!’ warned the MIT network scientist Cesar Hidalgo on Facebook yesterday. ‘The question is, how long will it take for people to change their profile pictures back to normal.’

In celebration of the Supreme Court’s approval of same-sex marriage, the site is offering users a tool to overlay their profile photos with a rainbow filter. But some people, such as MIT network scientist Cesar Hidalg, say the social network is carrying out another psychological test on its users

By setting up its own tool to let people filter their profile picture with the Celebrate Pride tool, the concern is that Facebook is able to get an unprecedented insight into how to influence people. Facebook did not respond immediately for comment, but, as a report in the Atlantic points out, the site has long been involved in research to better see how information spreads in a social network.

For instance, in March 2013, the company published a study that looked at the factors that predicted support for marriage equality on Facebook. The research looked at what might influence a user changing their or her profile photo to the red equals sign. They found that, people with more friends changing their profile photo to a red equals sign were more likely to go through with the change to their profile picture.

How Facebook spies on you and steals your information

When you joined Facebook, were you fully aware of how many privacy rights you signed away? With its unlimited access to your personal photos, information, messages and activity, we ask: Is Facebook Spying On You?