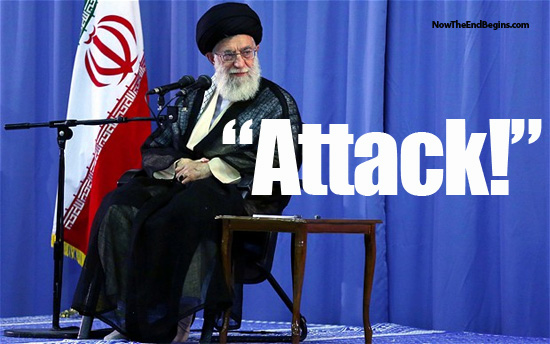 Iran's Supreme Leader has ordered the country's Revolutionary Guards to intensify its campaign of terror attacks against the West and its allies in retaliation for supporting the overthrow of President Bashar al-Assad in Syria.
by Geoffrey Grider August 22, 2012
NOW THE END BEGINS SHARE:

According to Western intelligence officials, Ayatollah Ali Khamenei gave the order to the elite Quds Force unit following a recent emergency meeting of Iran’s National Security Council in Tehran held to discuss a specially-commissioned report into the implications for Iran of the Assad regime’s overthrow.

Iran’s Supreme Leader has ordered the country’s Revolutionary Guards to intensify its campaign of terror attacks against the West and its allies in retaliation for supporting the overthrow of President Bashar al-Assad in Syria.

Damascus is Iran’s most important regional ally, and the survival of the Assad regime is regarded as vital to sustaining the Iranian-backed Hizbollah militia which controls southern Lebanon.

The report, which was personally commissioned by Mr Khamenei, concluded that Iran’s national interests were being threatened by a combination of the U.N. sanctions imposed over Iran’s nuclear programme and the West’s continuing support for Syrian opposition groups attempting to overthrow the Syrian government.

Intelligence officials say the report concludes that Iran “cannot be passive” to the new threats posed to its national security, and warns that Western support for Syrian opposition groups was placing Iran’s “resistance alliance” in jeopardy, and could seriously disrupt Iran’s access to Hizbollah in Lebanon.

It advised that the Iranian regime should demonstrate to the West that there were “red lines” over what it would accept in Syria, and that a warning should be sent to “America, the Zionists, Britain, Turkey, Saudi Arabia, Qatar and others that they cannot act with impunity in Syria and elsewhere in the region.”

Mr Khamenei responded by issuing a directive to Qassem Suleimani, the Quds Force commander, to intensify attacks against the West and its allies around the world.

The Quds Force has recently been implicated in a series of terror attacks against Western targets. Last year U.S. officials implicated the organisation in a failed assassination attempt against the Saudi Arabian ambassador to Washington. It was also implicated in three bomb attacks against Israeli diplomats in February, planning to attack the Eurovision song contest in Azerbaijan while two Iranians were arrested in Kenya last month for possessing explosives.

Intelligence officials believe the recent spate of Iranian attacks has been carried out by the Quds Force’s Unit 400, which runs special overseas operations.

“Unit 400 seems to have been involved in all the recent Iranian terrorist operations,” said a senior Western intelligence official. “The Iranian regime now seems determined to retaliate for what they regard as the West’s attempts to influence the outcome of the Syrian unrest.”

Iran has been actively supporting the Assad regime’s attempts to suppress the wave of anti-government protests that erupted in March last year. Iranian opposition groups claim teams of experienced Revolutionary Guard officers have been flying to Damascus on specially-chartered Iranian aircraft on a weekly basis to advise the Assad regime.

The extent of Iran’s support for the Assad regime was exposed earlier this month when 48 Iranians were captured and taken hostage by Syrian opposition fighters. The Iranians, who are said to include senior Revolutionary Guard officers, claimed they were conducting “reconnaissance missions”, and their capture by Syrian opposition fighters was deeply embarrassing for Tehran, which is demanding their immediate safe return to Iran. Syrian rebels have threatened to kill the hostages unless Iran ends its support for the Assad regime. source – Telegraph