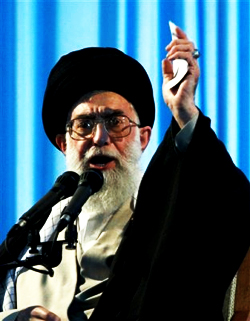 “We’ll be at war within weeks,” he said.

Each of the participants was tapped to report on the readiness of his branch or sector for shouldering its contingency mission.
While retaliation had been exhaustively drilled in regular military exercises in the past year, Khamenei ordered the biggest fortification project in Iran’s history to save its nuclear program from even the mightiest of America’s super-weapons.

Rocks are being gathered from afar, piled on key nuclear installations, covered with many tons of poured concrete and finally plated with steel. That same Friday, the US Air force unveiled its new Massive Ordnance Penetrators. Each bunker buster weighs 30,000 pounds and is able to penetrate 60 feet of reinforced concrete.

Turning to retaliation, the war council endorsed a battery of paybacks for potential US and/or Israeli pre-emptive strikes against its nuclear program. They would start by announcing enhanced uranium enrichment up to 60 percent – that is close to weapons grade. Oft-tested ballistic missiles, Shehab-3, would be loosed against Israel, Saudi Arabia and American Middle East and Gulf military installations.

Hizballah in Lebanon and Hamas and Jihad Islami in Gaza stand ready to pitch in against Israel with attacks from the north and the southwest.

Saudi oil export terminals would be blown up and mines sown in the Strait of Hormuz to impede the export of one-fifth of the world’s oil.

Khamenei put before his war council a timeline of weeks for the coming conflict – September or October. source – DEBKA