In a statement provided exclusively to The Post, a Department of Defense spokesman said a secret government initiative called the Advanced Aerospace Threat Identification Program “did pursue research and investigation into unidentified aerial phenomena.” And while the DOD says it shut down the AATIP in 2012, spokesman Christopher Sherwood acknowledged that the department still investigates claimed sightings of alien spacecraft.

The Pentagon has finally uttered the words it always avoided when discussing the possible existence of UFOs — ‘unidentified aerial phenomena’ — and admits that it still investigates reports of them.

If you have been paying any attention at all to our reporting on UFOs over the years, you will have noticed that the US government has been slow-walking towards admitting that they deem UFOs to be real, credible and actual. Dozens of videos have been released recently showing US Air Force pilots reacting to hyper-fast UFOs with the whole thing captured on video.

“There were giants in the earth in those days; and also after that, when the sons of God came in unto the daughters of men, and they bare children to them, the same became mighty men which were of old, men of renown.” Genesis 6:4 (KJV)

As bible believers, we know exactly what these UFOs are, and who is behind it. In Genesis 6, we see that the reason for the Flood of Noah was because fallen angels come to Earth, had sex with human women, and gave birth to a wicked race known as the Nephilim. Jesus in Matthew 24 says in the coming time of Jacob’s trouble after the Pretribulation Rapture of the Church, it will be just like it was then. So when you hear of ‘UFO reports’ now you know who these beings are.

As we are fond of saying around here, Flight #777 on Titus213 Airlines now boarding…

FROM THE NY POST: In a statement provided exclusively to The Post, a Department of Defense spokesman said a secret government initiative called the Advanced Aerospace Threat Identification Program “did pursue research and investigation into unidentified aerial phenomena.” 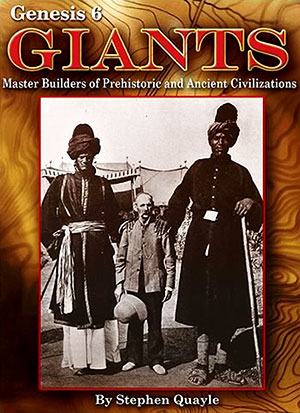 And while the DOD says it shut down the AATIP in 2012, spokesman Christopher Sherwood acknowledged that the department still investigates claimed sightings of alien spacecraft.

“The Department of Defense is always concerned about maintaining positive identification of all aircraft in our operating environment, as well as identifying any foreign capability that may be a threat to the homeland,” Sherwood said.

“The department will continue to investigate, through normal procedures, reports of unidentified aircraft encountered by US military aviators in order to ensure defense of the homeland and protection against strategic surprise by our nation’s adversaries.”

Nick Pope, who secretly investigated UFOs for the British government during the 1990s, called the DOD’s comments a “bombshell revelation.”

Nick Pope, a former UK defense official-turned-author, said, “Previous official statements were ambiguous and left the door open to the possibility that AATIP was simply concerned with next-generation aviation threats from aircraft, missiles and drones — as skeptics claimed.

“This new admission makes it clear that they really did study what the public would call ‘UFOs,’ ” he said. “It also shows the British influence, because UAP was the term we used in the Ministry of Defence to get away from the pop culture baggage that came with the term ‘UFO.’ ”

John Greenewald Jr. — whose website The Black Vault archives declassified government documents on UFO reports, “Bigfoot” sightings and other subjects — also called the Pentagon’s use of the term “unidentified aerial phenomena” unprecedented in its frankness. I’m shocked they said it that way, and the reason is, is they’ve seemingly worked very hard not to say that,” he said.

“So I think that’s a pretty powerful statement because now we have actual evidence — official evidence — that said, ‘Yes, AATIP did deal with UAP cases, phenomena, videos, photos, whatever.’”

Greenewald said he hopes that the Pentagon will release more information about the AATIP, either by voluntary disclosure or through requests under the federal Freedom of Information Act. “But at least we’re one step closer to the truth,” he said.

In 2017, several news organizations revealed the existence of the Advanced Aviation Threat Identification Program (AATIP), a U.S. government-funded investigation into unidentified flying objects from 2007 to 2012. This secret $22 million program, however, was not the first of its kind. Official government UFO studies began in the late 1940s with Project Sign, providing some of the most credible videos of aerial phenomena to date. The 2017 revelation that the U.S. government was actively researching UFOs re-ignited world interest in UFOs and aliens. Below are five of the most believable UFO sightings of the 21st century. source

The existence of the AATIP was revealed in 2017, along with a 33-second DOD video that shows an airborne object being chased by two Navy jets off the coast of San Diego in 2004.

At the time, former Senate Majority Leader Harry Reid (D-Nev.) took credit for arranging $22 million in annual funding for the AATIP, telling the New York Times that it was “one of the good things I did in my congressional service.”

Reid’s home state of Nevada hosts the top-secret military installation known as “Area 51,” long rumored to be the storehouse for an alien craft that crashed in Roswell, New Mexico, in 1947. Reid, through a spokeswoman, declined to comment. READ MORE

UFO Spotted: The video was filmed in 2004 and investigated as part of the Advanced Aerospace Threat Identification Program. It’s not clear if the object was ever identified. The New York Times reports that the US Department of Defense programme was shut down in 2012.

A U.S. Navy F/A-18 Super Hornet encountered this apparent UFO off the East Coast of the United States in 2015.