Icelanders will soon be able to publicly worship at a shrine to Thor, Odin and Frigg with construction starting this month on the island’s first major temple to the... 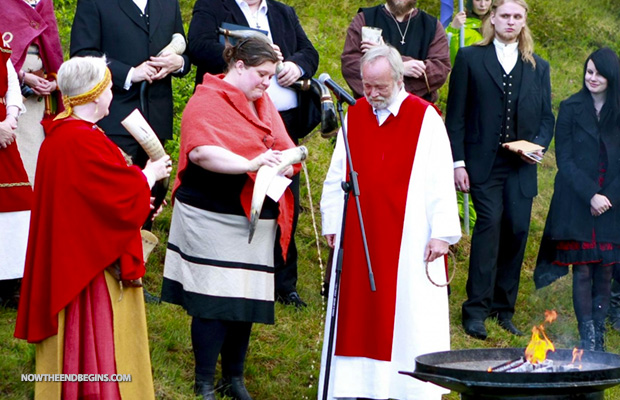 Icelanders will soon be able to publicly worship at a shrine to Thor, Odin and Frigg with construction starting this month on the island’s first major temple to the Norse gods since the Viking age.

“And the rest of the men which were not killed by these plagues yet repented not of the works of their hands, that they should not worship devils, and idols of gold, and silver, and brass, and stone, and of wood: which neither can see, nor hear, nor walk:” Revelation 9:20 (KJV)

RELATED AUDIO: The Bible Believers Guide To The One World Religion Of The Great Tribulation

The bible clearly states that the religion of the time of the Great Tribulation, will be a hybrid mix of Roman Catholicism, Islam and Paganism. Anyone who is paying the least bit of attention these days is seeing a drastic increase of all three, but specifically in paganism. We highly recommend that you listen to the above audio bible study link on the religion of the Tribulation. It will be an eye-opener for sure.

Reykjavik, Iceland – Worship of the gods in Scandinavia gave way to Christianity around 1,000 years ago but a modern version of Norse paganism has been gaining popularity in Iceland.

“I don’t believe anyone believes in a one-eyed man who is riding about on a horse with eight feet,” said Hilmar Örn Hilmarsson, high priest of Ásatrúarfélagið, an association that promotes faith in the Norse gods. “We see the stories as poetic metaphors and a manifestation of the forces of nature and human psychology.”

Membership in Ásatrúarfélagið has tripled in Iceland in the last decade to 2,400 members last year, out of a total population of 330,000, data from Statistics Iceland showed.

The temple will be circular and will be dug 4 metres (13ft) down into a hill overlooking the Icelandic capital Reykjavik, with a dome on top to let in the sunlight. “The sun changes with the seasons so we are in a way having the sun paint the space for us,” Hilmarsson said.

The temple will host ceremonies such as weddings and funerals. The group will also confer names to children and initiate teenagers, similar to other religious communities. Iceland’s neo-pagans still celebrate the ancient sacrificial ritual of Blot with music, reading, eating and drinking, but nowadays leave out the slaughter of animals. source – Guardian UK