HORROR MOVIE: Virginia Man Receives Johnson & Johnson Jab And All His Skin Blistered And Peeled Away From His Body In ‘Adverse Reaction’ Nightmare

What began as a slight 'discomfort' under Richard Terrell's arm four days after his vaccination quickly escalated into an itchy, swollen flush covering most of his body.  'It all happened so fast. My skin peeled off,' Terrell told WRIC. By March 19, he sought a dermatologist's help, and the doctor sent him to an emergency room. His doctors at the ER ultimately ruled that Terrell's scary skin condition was indeed an extremely rare side effect of the vaccine, caused by the frenzied activation of his immune system. The official term used by dermatologists and allergists to describe the side effect is 'delayed cutaneous hypersensitivity.'

A 74-year-old Virginia man broke out into a scarlet red rash and his skin peeled away from his body after getting Johnson & Johnson’s one-dose COVID-19 vaccine jab.

I’m sure this is just another article on the ‘crazy conspiracy theories’ of the anti-vaxxers who refuse to take the current COVID jab, or, it’s a stunning illustration of what these vaccines can do to your body when you have an ‘adverse reaction’ after receiving it. But please take a good look at these photos and you tell me if you want to risk getting jabbed. I suppose it could have been worse, Richard Terrell could be visiting with Marvelous Marvin Hagler and Hank Aaron right now.

But don’t worry, vaccine advocates assure us that this “rash” was basically harmless and really amounts to nothing more than a case of poison ivy. Is that the conclusion that you come away with after reading this story? The conclusion I come to after seeing this mess is a 100% reinforcement of my belief in never taking the COVID vaccine.

NTEB PROPHECY NEWS PODCAST: HERE ARE MY TOP TEN REASONS WHY I PERSONALLY WOULD NEVER TAKE THE COVID-19 VACCINE

His legs, hands and arms swelled beyond recognition and his skin turned scarlet red, cracked and ‘peeled off’

FROM THE DAILY MAIL UK: What began as a slight ‘discomfort’ under Richard Terrell’s arm four days after his vaccination quickly escalated into an itchy, swollen flush covering most of his body.  ‘It all happened so fast. My skin peeled off,’ Terrell told WRIC.

By March 19, he sought a dermatologist’s help, and the doctor sent him to an emergency room. His doctors at the ER ultimately ruled that Terrell’s scary skin condition was indeed an extremely rare side effect of the vaccine, caused by the frenzied activation of his immune system. 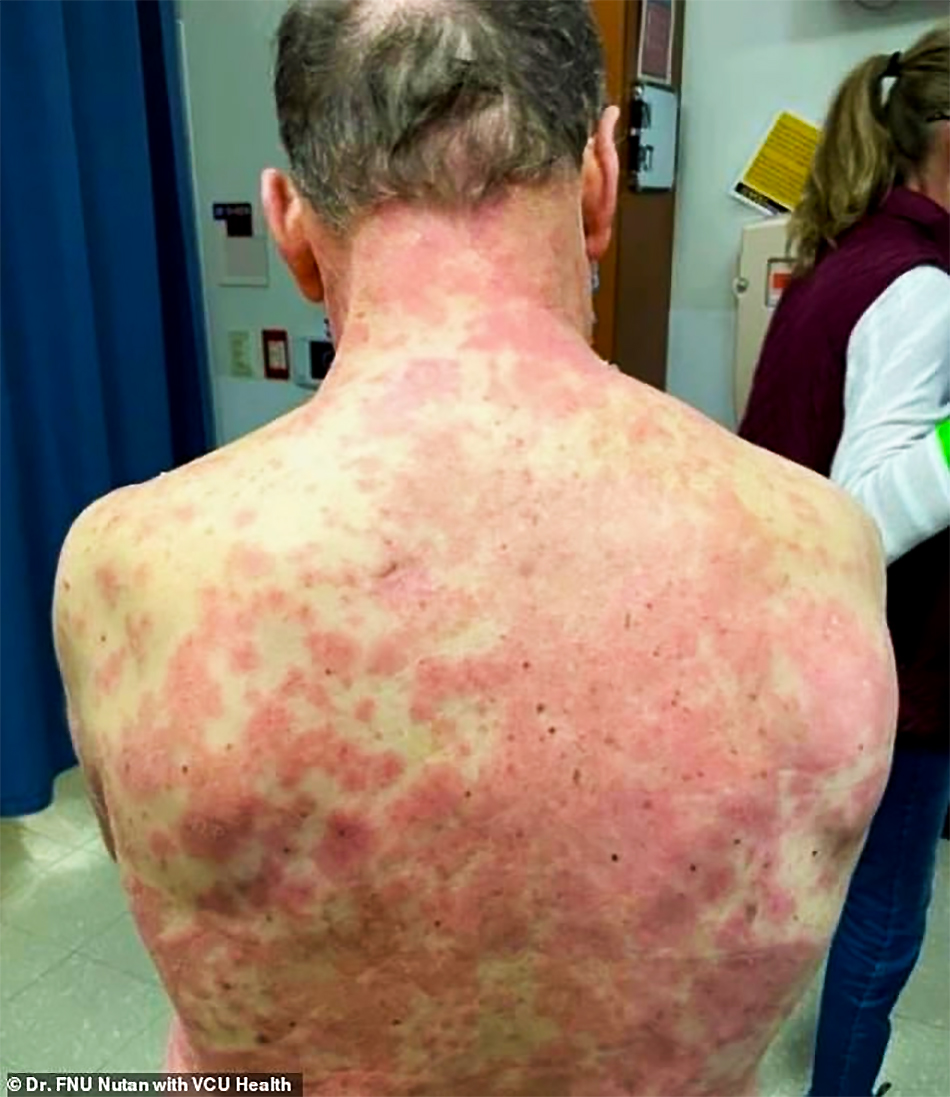 What began as a slight ‘discomfort’ under Richard Terrell’s arm four days after his vaccination quickly escalated into an itchy, swollen flush covering most of his body

Terrell’s reaction was reported to the Centers for Disease Control and Prevention (CDC) and, after five days in the hospital, he recovered and was able to go home. Despite the harrowing reaction, Terrell does not regret his vaccination and encourages everyone to get theirs.  Terrell’s reaction was not unlike the ‘Covid arm’ rash seen in some recipients of Moderna’s vaccine. But the splotch is typically a harmless response from the immune system to the shot that fades within a week.

The official term used by dermatologists and allergists to describe the side effect is ‘delayed cutaneous hypersensitivity.’ Cutaneous means affecting the skin, hypersensitivity mean an unwanted reaction produced by the immune system and delayed because it typically occurs days after the shot is given.

The rash is typically red and swollen, and sometime painful to the touch, and always appears on the arm in which the vaccine was administered. But Terrell’s reaction went beyond mild, passing irritation. His legs and hands swelled grotesquely and turned a deep, painful purple.

‘It was stinging, burning and itching,’ Terrell told WRIC. ‘Whenever I bent my arms or legs, like the inside of my knee, it was very painful where the skin was swollen and was rubbing against itself.’

Even Terrell’s back broke out red splotches. He stuck it out for several days before making an appointment with a dermatologist, who sent him to an emergency room where he was quickly admitted to Virginia Commonwealth University (VCU).

‘We ruled out all the viral infections, we ruled out COVID-19 itself, we made sure that his kidneys and liver was okay, and finally we came to the conclusion that it was the vaccine that he had received that was the cause,’ Dr Fnu Nutan, who treated Terrell.

‘Skin is the largest organ in the body, and when it gets inflamed like his was, you can lose a lot of fluids and electrolytes,’ she said, explaining that the reaction can become life-threatening as a result of dehydration if left untreated.  READ MORE