Many Republican lawmakers have accused the Obama administration of being lax on enforcement, and they have said they would not consider an overhaul of immigration laws that President Obama... 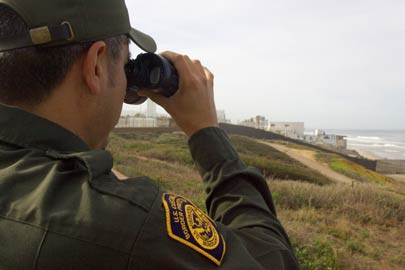 Ms. Napolitano said she had concluded that the original concept of the project, to develop a single technology that could be used across the entire border, was not viable.
by Geoffrey Grider January 15, 2011
NOW THE END BEGINS SHARE:

Two issues that drive Americans absolutely crazy combine in this story to confirm that our government is not listening to us.  First, we want our borders secure. No one seems to be in a rush to do so, despite all the violence just across our southern border, and the fact that terrorists are taking advantage of our broken borders to enter our country at an alarming rate. The second issue is wasteful government spending. The U.S. government has no problem spending a billion dollars on a project, and then just scrapping the whole thing. A billion dollars is hard for the average American to even comprehend, let alone that the government could waste such an amount without batting an eye.

The Department of Homeland Security on Friday canceled a project to build a technology-based “virtual fence” across the Southwest border, saying that the effort — on which $1 billion has already been spent — was ineffective and too costly.

Janet Napolitano, the homeland security secretary, said she had decided to end the five-year-old project, known as SBI-Net, because it “does not meet current standards for viability and cost effectiveness.” In a statement, Ms. Napolitano said border agents would instead use less expensive technology that is already part of their surveillance equipment, tailoring it to the specific terrain where they will be scouting for illegal border crossers and drug traffickers.

Ms. Napolitano said she had concluded that the original concept of the project, to develop a single technology that could be used across the entire border, was not viable.

Ms. Napolitano suspended financing for the project in March and ordered a review, which was just completed.

But officials moved slowly to cancel the project because it had been ensnared in the contentious debate over border security. Many Republican lawmakers have accused the Obama administration of being lax on enforcement, and they have said they would not consider an overhaul of immigration laws that President Obama supports until the border is tighter.

“There is no one-size-fits-all solution to meet our border technology needs,” Ms. Napolitano said.  source: The New York Times

What is behind the absolute refusal to secure our borders? Could there be a sinister reason behind it? There are plenty of claims out there that this is all part of moving us toward a one world government and that in order to accomplish that goal, countries, and especially America, must lose sovereignty. Obama did tell Mexican President Felipe Calderon that we are not defined by our borders in a speech last year, so what exactly are we defined by?