Has The Islamic Quran Mobile Rolled Through Your American Small Town Yet? It Will.

The goal is to drive the Quran Mobile around Charlotte during busy hours. They hope to spread the message that Islam is a peaceful religion and the radical terrorists... 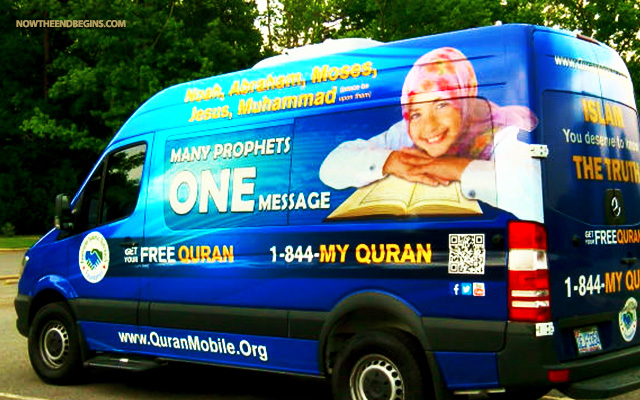 "You got everything from book mobiles to bat mobiles so why not a Quran Mobile," Zahir Shaikh, director of the Quran Mobile said.
by Geoffrey Grider June 13, 2015
NOW THE END BEGINS SHARE:

The Quran Mobile is rolling around Charlotte and Muslims hope it educates people about their faith.

Concerned about the public’s perception of Islam after radical Islamic terrorists like ISIS have dominated the news cycle, Charlotte Muslims with the American Islamic Outreach Center wanted to take action.

“You got everything from book mobiles to bat mobiles so why not a Quran Mobile,” Zahir Shaikh, director of the Quran Mobile said.

The goal is to drive the Quran Mobile around Charlotte during busy hours. They hope to spread the message that Islam is a peaceful religion and the radical terrorists they see on television don’t represent the 15,000 Muslims that live in Charlotte.

“Islam is portrayed in a very negative light because of the actions of some crazy people out there. But 99 percent of Muslims are good hearted just like any other denomination,” Shaikh said.

The Truth About Islam, Sharia Law and the Quran:

When the van stops, people will be able to receive a free copy of the Quran and the biography of the prophet Mohammad. The American Islamic Outreach Center hopes the van will promote interfaith efforts and dispel hatred.

“It would be better to try to come to an understanding or get to know someone. It’s better to give someone a chance before you decide you are going to hate everyone cause really it is heavy to carry that hatred around,” Shannon Hossain, spokesperson for the American Islamic Outreach Center, said.

For more information on the Quran Mobile, click here. source