They ran an algorithm to calculate the votes that they might need for Mr. Biden in specific areas. It happened in Michigan where a computer glitch resulted in a change in votes in I believe 5,500 in favor of President Trump just in one of 47 districts. All of those districts need to be checked for the software glitch that would change the vote for Michigan dramatically. The same thing is happening in other states. We’ve had hundreds of thousands of ballots appear for solely Mr. Biden which is statistically impossible as a matter of mathematics. It can all be documented it is being put in files that we will file in federal court.

Sidney Powell and Tom Fitton joined Lou Dobbs on Friday night to discuss the latest developments in the 2020 election. Sidney told Lou’s audience about the Hammer and Scorecard software that was used to steal Trump votes in Michigan.

At this point, it is a documented fact that various computer software programs like Hammer, Scorecard and Dominion were used to changed the upward trend of the votes received for Joe Biden. In Michigan for example, 6,000 votes cast for Donald Trump were given to Joe Biden, when the glitch was exposed the votes then returned to Trump. But that is only one district in Michigan, there are 46 more that are not being investigated.

Not only that, in many of these areas where tens of thousands of ballots were “discovered” for Joe Biden after they refused to continue counting on Tuesday night, the massive increase for Biden did not change the outcomes of hardly anyone running for state legislature. How can that be? Did all those people only vote for Joe Biden and left the rest of the ballot blank? If they were real ballots that would be impossible, and now you get the picture. These “new” votes are not new votes at all, and neither are they real. They are the product of computer AI and algorithms.

You going to be hearing the terms Hammer, Scorecard and Dominion a whole lot from this point on, you would do well to investigate these things for yourself and understand what is really happening all around you right now. Is this the moment that the enemies of America finally figured out the right combination of how to attack our system to bring it down? Are you going to sit on the sidelines and do nothing while you watch it happen?

Sidney Powell: They need to investigate the likelihood that 3% of the vote total was changed in the pre-election voting ballots that were collected digitally by using the Hammer program and the software program called Scorecard. That would have amounted to a massive change in the vote. It would have gone across the country and it explains a lot of what we’re seeing. In addition they ran an algorithm to calculate the votes that they might need for Mr. Biden in specific areas. It happened in Michigan where a computer glitch resulted in a change in votes in I believe 5,500 in favor of President Trump just in one of 47 districts. All of those districts need to be checked for the software glitch that would change the vote for Michigan dramatically. The same thing is happening in other states. We’ve had hundreds of thousands of ballots appear for solely Mr. Biden which is statistically impossible as a matter of mathematics. It can all be documented it is being put in files that we will file in federal court.

Michigan Republican Chairman Laura Cox spoke to reporters Friday about a software glitch in Antrim County that took about 6,000 votes from President Trump and GOP Senate candidate John James causing the normally red county to show a majority vote for former Vice President Biden and Democrat Sen. Gary Peters. Cox said the same vote tabulating software is used in 47 counties in Michigan and called on those counties to examine their vote counts. 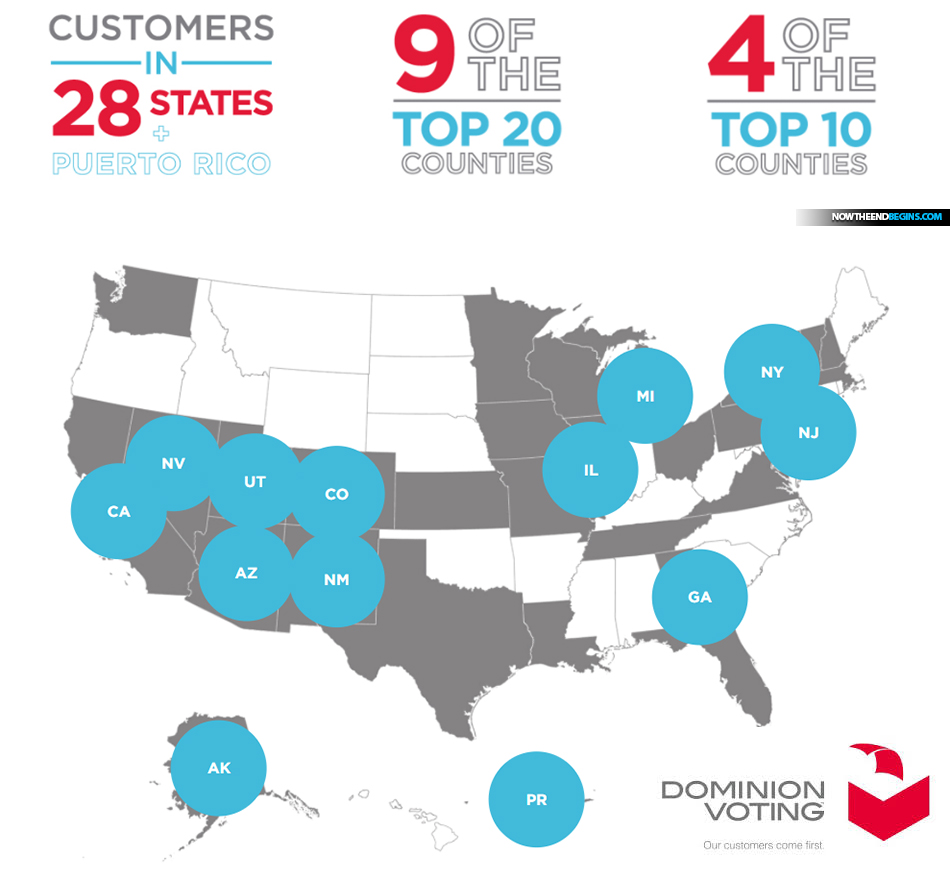 OH MY! IT LOOKS LIKE NEARLY ALL THE STATES WHERE DOMINION VOTING SOFTWARE IS USED ARE SOME OF THE SAME STATES THAT ARE MAGICALLY SWINGING FROM TRUMP TO BIDEN. IT’S A CHRISTMAS MIRACLE!!!

Later the state corrected the glitch in ONE COUNTY that gave 6,000 more votes to President Trump.

There are 47 more counties where the program was operating. This is calculated fraud by the Michigan Democrat Party. READ MORE

Hammer, Scorecard And Dominion Changing The Results For Biden