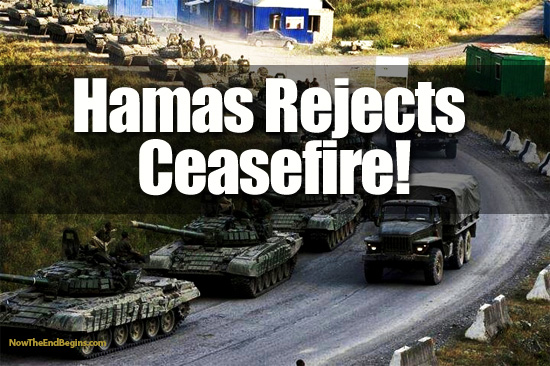 A Western source said it would take some days to determine if a ceasefire was feasible.
by Geoffrey Grider November 18, 2012
NOW THE END BEGINS SHARE:

No ceasefire as battle to stop Gaza missile strikes continues

OC Southern Command, Maj. Gen. Tal Rousso defined those objectives to reporters Saturday night as “eliminating the war arsenals of Hamas and terrorist organizations and restoring peace and normality to the population of southern Israel.”

When Egyptian and Turkish middlemen suggested a ceasefire was close, Israel accused them of pushing Hamas’s terms which were fashioned to present the Palestinian radicals as the victor in the contest. The trio leading the Israeli war, Prime Minister Binyamin Netanyahu, Defense Minister Ehud Barak and Foreign Minister Avigdor Lieberman, countered by intensifying the IDF’s Gaza offensive – though not as yet sending ground troops in.

A Western source said it would take some days to determine if a ceasefire was feasible. Egyptian intelligence meanwhile smuggled Hamas Prime Minister Islmail Haniyeh out of Gaza and over to El Arish in northern Sinai in the convoy of visiting Tunisian Foreign Minister Rafiq Abdessalem when he departed Gaza Saturday, DEBKAfile reports.

Egyptian President Mohamed Morsi decided that Haniyeh must be continuously available at the end of a phone to lead the Hamas side in the ceasefire negotiations. This was not possible so long as the Hamas prime minister remained in Gaza. All of Hamas leaders have gone to ground for fear of targeted assassination by Israel. They have switched off their phones and electronic communications to avoid giving away their locations to Israeli surveillance. Haniyeh was even afraid to communicate with Cairo through the Egyptian military mission in Gaza.

In these circumstances, Morsi and Erdogan’s were prevented from get their ceasefire mediation bid off the ground. Moving Haniyeh to El Arish put a Hamas negotiator in place to lead the give-and-take for a truce. Our sources have not discovered if he is still there or has moved back to Gaza.
The Turkish prime minister brought a secret passenger in the plane bringing him to Cairo Saturday. He is Saleh Aruri, formerly of the Hamas military wing.  Aruri had spent 15 years in an Israeli prison for terrorism and murder until he was released on Oct. 18, 2011 in the prisoner exchange for the Israeli soldier Gilead Shalit on condition he went into exile.

Turkey granted him asylum and its intelligence agency MIT gave him free rein to set up an operational command in Istanbul for Hamas terrorist networks on the West Bank. On arrival in Cairo, the Turkish prime minister put Aruri in charge of the contacts with Haniyeh.

At a news conference in Cairo Saturday night, the Egyptian president and Turkish prime minister reported “some indications that there could be a ceasefire soon” although “there were still no guarantees.”

The guarantees issue has become a pivotal bargaining point.

Israel, backed by the United States, insists that a ceasefire be signed between the US, Egypt, Turkey and Israel, and exclude Hamas, which would be bound by a separate agreement with Cairo.
Netanyahu, Barak and Lieberman are asking the United States to act as guarantor for a ceasefire. Erdogan has countered by inviting Russian President Vladimir Putin to join US President Barack Obama as victor.

During the night, Israel denied reports circulating in Cairo that an Israeli negotiator was heading for the Egyptian capital to get down to the specifics of an emerging truce deal. The three Israeli war leaders decided not to fall into the trap laid by Morsi and Erdogan. Instead, they told the IDF to press ahead with the operation until its objectives were attained – hence the launching of a fresh air and sea assault before daybreak Sunday.

OC Southern Command, Maj. Gen. Tal Rousso defined those objectives to reporters Saturday night as “eliminating the war arsenals of Hamas and terrorist organizations and restoring peace and normality to the population of southern Israel.”

The ground operation is meanwhile delayed, in accordance with Netanyahu’s promise to President Obama in their conversation early Saturday, that a full-scale ground invasion would not go forward so long as there was a chance of a ceasefire – unless there was escalation from Hamas or a strike that caused significant casualties.

A western source in Cairo familiar with the truce negotiations reported that Obama has not yet decided whether he wants to be directly involved in any ceasefire deal, which in any case has not reached the concluding stage. “The cake dough is still being kneaded and not yet ready to for the oven,” he said. source – DEBKA