Greece Votes A Resounding “No!” Rallying Around Leader Alexis Tsipras As Euro Plummets

Greece overwhelmingly rejected creditors' demands for more austerity in return for rescue loans in a critical referendum Sunday, backing Prime Minister Alexis Tsipras, who insisted the vote would give... 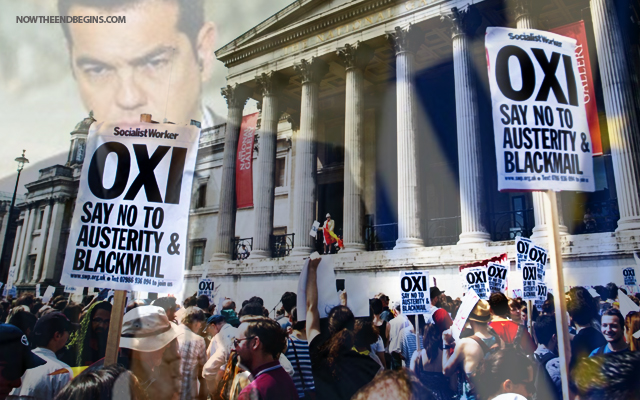 ATHENS, Greece — Greeks overwhelmingly rejected creditors’ demands for more austerity in return for rescue loans in a critical referendum Sunday, backing Prime Minister Alexis Tsipras, who insisted the vote would give him a stronger hand to reach a better deal.

Tsipras gambled the future of his 5-month-old left-wing government on the vote. The opposition accused him of jeopardizing the country’s membership in the 19-nation club that uses the euro and said a “yes” vote was about keeping the common currency.

Where will mystery man Alexis Tsipras take Greece by the time this ride ends?

With 70 percent of the votes counted, the “no” side had more than 60 percent. The interior ministry predicted that margin would hold. Finance Minister Yanis Varoufakis said Sunday night that creditors planned from the start to shut down banks to humiliate Greeks and force them to make a statement of contrition for showing that debt and loans are unsustainable.

On Sunday night’s result, he said that “‘no’ is a big `yes’ to democratic Europe. It’s a no to the vision of Europe an infinite cage for its people. It is a loud yes to the vision of the Eurozone as a common area of prosperity and social justice.”

Thousands of government supporters gathered in central Athens in celebration, waving Greek flags and chanting “No, No, No.”

Alexis Tsipras’ high-stakes brinkmanship with lenders from the eurozone countries and the International Monetary Fund resulted in Greece defaulting on its debts this week and shutting down its banks to avoid their collapse. He called the referendum last weekend, giving both sides just a week to campaign. source

The euro lost 1 percent to $1.1002 by 6:09 a.m. Sydney time, touching its weakest level since June 29. The currency slipped 1.7 percent against the yen and 0.9 percent versus the pound. With more than half of the ballots counted, Greeks have voted 61 percent against austerity measures required to win another bailout package, according to results posted on the Interior Ministry’s website. The results mean Greece exiting the currency union is now the base-case scenario, JPMorgan Chase & Co. said.

Greeks started hoarding cash and food Saturday amid mounting fears the economy could collapse, cracking open their wallets only to stock up on essentials and stripping supermarket shelves in the process. Mothers, elderly men and university students were spotted pushing heavily overloaded trolleys or coming out of shops weighed down by bags of food, with essentials such as sugar, flour and pasta top of the list.

In the well-off area of Glyfada in Athens residents appeared to have panicked, thrusting everything from vast rolls of toilet paper to multiple packs of lentils into their carts.

“Most people are buying food now because they fear the worst,” said Andreas Koutras, a 51-year old who works in finance. AFP photographs showed rows upon rows of empty shelves in supermarkets and shoppers said they were taking no chances, snapping up canned milk, chocolate and rice — anything non-perishable that could be stored.

Middle-aged toy shop assistant Marilena, who was praying for customers on what is usually the busiest shopping day of the week, said her family was buying “food, only food, nothing else. Only what’s necessary”.