Greece Teeters On The Edge…Will It Fall?

ATHENS, Greece – Squeezed between worried creditors and an angry public, Greece's beleaguered prime minister tried to tamp down an escalating revolt within his own Socialist party Thursday over... 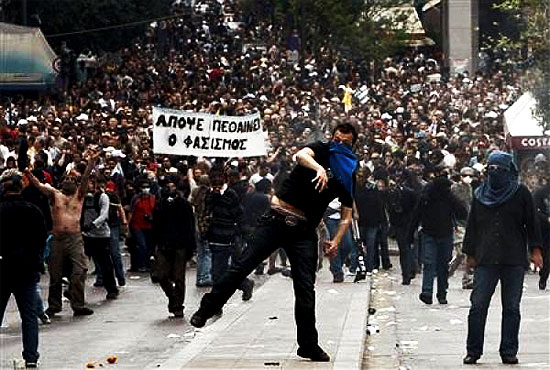 ATHENS, Greece – Squeezed between worried creditors and an angry public, Greece’s beleaguered prime minister tried to tamp down an escalating revolt within his own Socialist party Thursday over new austerity measures.

Two prominent Socialist lawmakers resigned hours before Prime Minister George Papandreou was to reschuffle his Cabinet, a tactic he hoped would help get new taxes and spending cuts approved before Greece was cut off from international lending. The resignations don’t affect the government’s five-seat majority in parliament, but raise more doubts about Papandreau’s handling of Greece’s escalating financial crisis.

“The political system is rotting … The country is not being governed the way it should be,” said Socialist deputy Nikos Salagianis. “A reshuffle will not resolve the country’s problems.”

Trying to quiet the criticism, the Socialists announced emergency talks for Thursday afternoon, which will likely delay Papandreou’s announcement of his new cabinet.

Greece’s rapidly evolving political crisis comes a day after anti-austerity riots in central Athens and the collapse of negotiations to form a coalition government triggered a sell-off in global financial markets. Investors are deeply worried that a default in Greece could hurt banks elsewhere and set off a financial chain reaction that experts predict would be catastrophic.

Fears that a messy Greek default may be in the offing has sent the euro down nearly four cents over the past couple of days to below $1.41, triggered widespread selling in stock markets and pushed the Greek yield on its ten-year bonds up to a record over 18 percent. source – Yahoo News