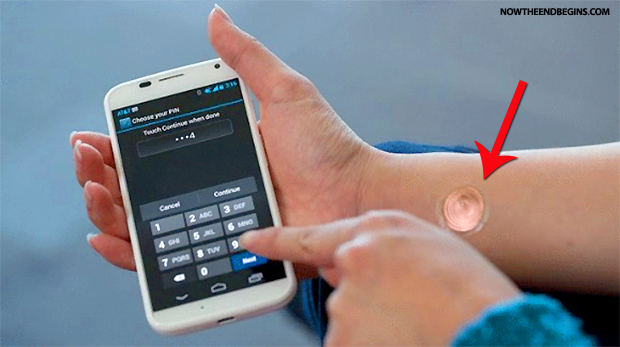 Preparing an unsaved world to receive the mark of the beast

“But thou, O Daniel, shut up the words, and seal the book,even to the time of the end: many shall run to and fro, and knowledge shall be increased.” Daniel 12:4

Technology is advancing at a blistering pace, as the prophet Daniel was told that it would by the angel Gabriel. Knowledge is increasing and multiplying so rapidly that it has become nearly overwhelming. The bible says that in the last days, during the time of the Great Tribulation after the Rapture of the Church, people will be forced to either accept the mark of the beast or die rejecting it. Today’s news that Google has released a smartphone that is activated by a human-wearable digital tattoo is one of the last steps to occur before rolling out permanent implantable chip technology. The Mark of the Beast is absolutely on it’s way, click here to miss it completely.

VivaLnk has developed eSkin™ technology where electronics, in an ultra-thin and flexible material, communicate with a user’s smartphone wirelessly.

VivaLnk, Inc., a Silicon Valley technology company has announced the world’s first commercial eSkin™ electronics product, Digital Tattoo, developed with Google’s Advanced Technology and Projects (ATAP) group. ATAP is a small, agile skunkworks team within Google. The nickel sized, paper thin adhesive Digital Tattoo is worn on the wrist. Vivalnk’s Digital Tattoo works on Motorola’s Moto X smartphone and the VivaLnk team is looking to expand to other devices and future versions of Android. When worn by the smartphone user, Digital Tattoo provides electronic authentication to unlock the phone for use and make logging into your device fast, easy and secure. They last for 5 days and work anywhere, anytime.

VivaLnk has developed eSkin™ technology where electronics, in an ultra-thin and flexible material, communicate with a user’s smartphone wirelessly. Digital Tattoo is a disposable product and can be worn for approximately 5 days at a time and then replaced with another Digital Tattoo. VivaLnk’s Program Manager, Brandon Barbello, said the Company has begun selling Digital Tattoo ten-packs through its website, www.vivalnk.com, for $9.99.

After setting up Moto X, you will separately activate a Digital Tattoo. Simply tap the back of Moto X to your Digital Tattoo and follow the onscreen instructions. For the first activation, you will be prompted to re-enter your existing PIN and to set a master PIN. For the remaining activations of the same tattoo you pair the tattoo and tap to activate.

Digital Tattoo is a simple application of eSkin™ technology, but it is the first commercialized product of its kind. VivaLnk anticipates other products utilizing eSkin™ technology in health care, security, entertainment, and numerous other fields.