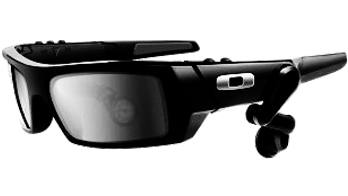 Anonymous Google employees say that the glasses will resemble a pair of Oakley Thumps (pictured above), will have 3G or 4G connectivity, a forward-facing camera, GPS, and a full array of movement sensors.
by Geoffrey Grider February 23, 2012
NOW THE END BEGINS SHARE:

By the end of 2012, Google will launch a pair of Android-powered, augmented reality, head-up display (HUD) glasses. Anonymous Google employees, speaking to The New York Times, say that the glasses will resemble a pair of Oakley Thumps (pictured above), will have 3G or 4G connectivity, a forward-facing camera, GPS, and a full array of movement sensors. They will cost “around the price of current smartphones.”

Anonymous Google employees say that the glasses will resemble a pair of Oakley Thumps (pictured above), will have 3G or 4G connectivity, a forward-facing camera, GPS, and a full array of movement sensors.

Unlike Google’s upcoming home entertainment system, a pair of wearable Google Glasses makes an awful lot of sense. Google’s arsenal of real-time, mobile, location-aware services is second to none; Search, Latitude, Goggles(!), Maps, Places/Hotpot, Navigation, AdSense, Transit, Wallet, Offers, Product Search, Translate, Voice, Music — each and every one of them could be built into a pair of Android-based spectacles, and boy would the end result be awesome.

Let’s take a look at what life with a pair of Googgles would be like.

You wake up, shower, and put on your Google specs. Latitude records your movement and marks you as “awake.” Brushing your teeth in front of the mirror, Maps tells you that there’s traffic on the way to work. Hopping into the car, Navigation shows you a different route to work. As you pass Dunkin’ Donuts, Places warns you that the remains of a rat were recently found in a cup of coffee — but at the same time, Offers tells you that a cup of coffee and a donut is only $1. While stopped at some lights, you check out a hottie crossing the road, and Goggles pops up their Google+ profile. You could even snap a photo or quick video, with that front-facing camera. At the office, or perhaps back at home in front of the TV, Translate would mean that you can understand any written or spoken language.

All the while, Music is piping favorite tunes through your earbuds — or perhaps via Bluetooth to your car stereo or your Google home entertainment system — and Wallet means you never have to reach for your credit card or train ticket. It goes without saying, of course, that you could also make phone calls — either with 3G/4G Voice VoIP, or plain old GSM.

In short, Google could finally kick start the wearable computer dream. This has been a long time coming, and ultimately inevitable given the continued miniaturization and commoditization of computer chips.

As utopian as this sounds, though, it’s important to ground Google’s AR glasses in reality. To begin with, the first Google Glasses will only have a subset of the features listed above. Battery power density remains an ever-present issue, too, both in terms of bulkiness and longevity — though with a much smaller display than a smartphone or tablet, it’s possible that the Googgles won’t be much heavier than a pair of active 3D glasses, and a few hours of active use should be possible.

Then there are the privacy, security, and ethical repercussions to consider. The New York Times piece mentions that Google X labs, the team behind the glasses, wants to “ensure that people know if they are being recorded by someone wearing a pair of glasses with a built-in camera.” Obviously, though, the repercussions of a wearable computer that a) knows where you are, and b) what you’re looking at, will require a lot more than a blinking red “record” light on the front of the specs. The phrase “tracking cookie” takes on a whole new meaning when Google also correlates your real-world activities with your online presence. Remember, Google is ultimately an advertising company, where eyeballs directly translate into money — and it’s hard to get any closer to your eyes than a pair of augmented reality glasses. When you look at a car dealership, Google will be able to display ads from a competitor. When you sit in front of a computer, or TV, or stare through a shop window, the glasses will be able to track your head movements and report back on the efficacy of display ads. Perhaps most excitingly, when you read a newspaper or book or other static medium, Google could even overlay its own, interactive ads.

If Google can allay our concerns — or make the experience awesome enough that our concerns melt away — then augmented reality really will be as powerful as I’ve described. It was only yesterday that David and I discussed whether tablets or smartphones would lead the future of mobile computing — and now it seems like we should’ve considered a third option as well: glasses. For Google, assuming it manufactures these glasses through its new Motorola subsidiary, this could finally be a way to generate revenue from something other than search, and without facing off against Apple and Samsung. Genius. source – Extreme Tech