Time Warner Cable is unveiling a 24-hour channel devoted to Pope Francis impending visit to the U.S., which will broadcast to 15 million households from Sept. 20 through Sept.... 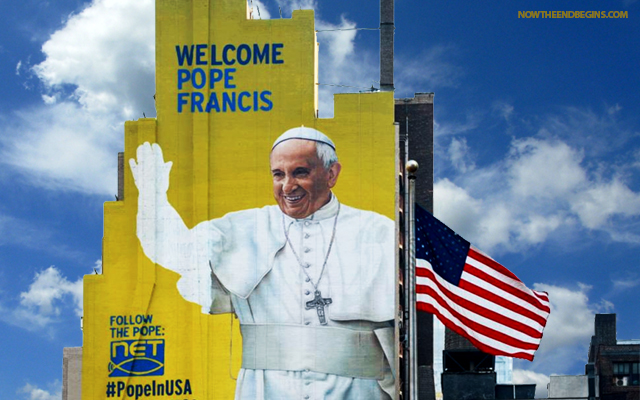 It’s all Pope Francis, all the time.

EDITOR’S NOTE: We have been reporting for months now that Pope Francis America trip will be a political one as he pushes his New World Order agenda before Congress and the United Nations. Now global news conglomerate Time-Warner Cable is launching a 24-hour Pope channel to drive his message home.

Time Warner Cable is unveiling a 24-hour channel devoted to Pope Francis’ impending visit to the U.S., which will broadcast to 15 million households from Sept. 20 through Sept. 27. It will be available for most subscribers on Channel 199, and also online and on the TWC News app, according to the New York Times.

The papal network will feature analysis and commentary on the Pope’s visit, plus a twist on NY1’s call-in show and a nightly 10 p.m. news broadcast. When the Pope isn’t speaking, TWC will air papal coverage repeats.

One Time Warner exec said that many people want to watch the Pope, but only to an extent. Those who don’t want to miss a papal moment can switch to the new channel.

Chrislam founder Rick Warren working hard to sell a “Christian” Pope Francis to his followers. Notice how he slyly calls him “our pope”. Good job, Rick, you end times deceiver and false teacher.

“At a certain point, when you’re a news channel, you still want to be giving weather on the 1s and providing the coverage people want,” Steve Paulus, Time Warner Cable’s senior vice president for news, told the Times. source

Here are some of Pope Francis talking points that the new Pope cable channel will be running night and day:

As he travels all over the world, at each stop he is building his political power base, using Vatican influence to grant favors, and seducing gullible American Christians back into the tent of the Harlot herself, Mother Rome. Even Chrislam founder Rick Warren calls Francis “our pope”. On September 23, Pope Francis will make his boldest move yet when he addresses Congress. A feat never been done by any pope in the entire history of the United States. Here is a preview of what you can expect he will talk about:

Pope Francis is a Socialist, with Communist overtones, and as such he will chastise America for not allowing more illegal aliens through our borders. Honduran Cardinal Oscar Rodriguez Maradiaga, a top adviser to Francis, told an audience at Georgetown University, that Francis would have liked to enter the U.S. by crossing the border with Mexico to make a point about welcoming immigrants, not building walls to keep them out. He said that while time did not allow for a border stopover, the pontiff was certain to raise the issue on Capitol Hill.

“Capitalism is not a god. It is not a divinity. It is not a system that is perfect and does not need any modification,” he said during a luncheon meeting. “This system is fostering tremendous inequalities.” Socialism is not compatible with Capitalism because you cannot have successful people in the New World Order. Everyone needs to be dragged down to the same level of mediocrity, while the ruling elites live like kings.

“The free market economy is not complete. We need a social market economy. This is the big contribution of the Catholic faith to the system — to try to have this social component that will bring more justice to the system,” he said. “It is not fair that a system that is producing so much richness could walk side by side with so much poverty.”

To deal with climate issues, he has also called for an “Earth Constitution that would transcend the UN Charter” along with the creation of a “Global Council…elected by all the people on Earth” and a “Planetary Court..a transnational legal body open to appeals from everybody, especially with respect to violations of the Earth Constitution.” The two main issues of “protecting the earth” are climate change and global depopulation. Expect Francis to bring out all the big guns on this favorite hobby horse of the Liberal Socialists who run America. source