Germany will spend around $6.6 billion to cope with some 800,000 mostly Muslim migrants and refugees expected to have crossed into the country by the end of 2015, the... 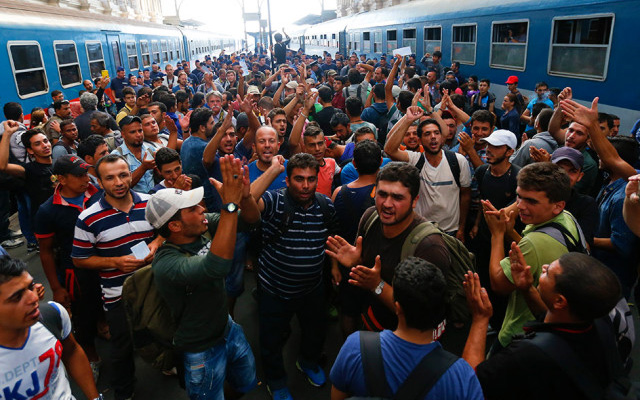 You have to hand it to the Muslims, they crafted an excellent plan of attack, have stuck with it no matter the opposition, and now they have been rewarded for their efforts with the grand prize they have sought. Germany just became a Muslim nation, and all they had to do was to execute biological jihad by swarming the borders. For every 6 legitimate Muslim “migrant refugees”, you have 4 ISIS terrorists in hiding slithering alongside with them. So out of a group of 800,000 migrant refugees, approximately 360,000 of them have terror connections.

It will only be a matter of months, maybe even mere weeks before this teeming sea of Muslim migrants begin to demand concessions to Islam, halal foods, and eventually Sharia Law within the German court system. Germany just sealed their own doom with a stroke of the pen. Peace in our time.

The European Union’s top prosecutor says she has been told that Islamic State terrorists are being smuggled across the Mediterranean hidden among migrants.

Germany will spend around $6.6 billion to cope with some 800,000 mostly Muslim migrants and refugees expected to have crossed into the country by the end of 2015, the government said early Monday. The announcement by Chancellor Angela Merkel’s coalition government came after Germany and neighboring Austria threw open their borders to the wave of refugees making their way north and west from the Middle East, Africa and elsewhere. Hungary has been letting the human tide move on after holding it up for days.

“We had to give a strong signal of humanity to show that Europe’s values are valid also in difficult times. Hungary’s handling of the crisis is unbearable,” said Germany’s Secretary-General Yasmin Fahimi.

Would it be intolerant, bigoted or racist of me to point out that Yasmin Fahimi’s father was an Iranian and that she is a Muslim? Can you see the whole picture rapidly becoming clearer now? In the coming days we will be posting videos of these “Muslim migrants” showing them attacking police, turning over humanitarian aid vehicles, assaulting the elderly, and pronouncing death to Europe and America. One more clue for you: look at the above photo of the “fleeing migrants”, where are the women and children? The official story says that had to flee for their own safety, right? Did all the men leave all the defenseless women and children behind? Lol, oh how stupid liberals can be.

Welcome to the revolution.