The U.N. General Assembly approved a resolution on Thursday giving implicit recognition to Palestinian statehood despite threats by the United States and Israel to punish the Palestinian Authority by... 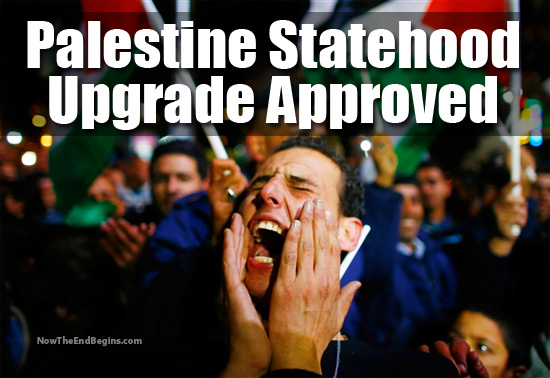 A Palestinian man shouts slogans during a rally in the West Bank city of Ramallah on Thursday. The U.N. General Assembly overwhelmingly approved a resolution on Thursday to upgrade the Palestinian Authority's observer status at the United Nations from "entity" to "non-member state." Marko Djurica / Reuters
by Geoffrey Grider November 30, 2012
NOW THE END BEGINS SHARE:

From NBC News: The U.N. General Assembly approved a resolution on Thursday giving implicit recognition to Palestinian statehood despite threats by the United States and Israel to punish the Palestinian Authority by withholding funds for the West Bank government.

A Palestinian man shouts slogans during a rally in the West Bank city of Ramallah on Thursday. The U.N. General Assembly overwhelmingly approved a resolution on Thursday to upgrade the Palestinian Authority’s observer status at the United Nations from “entity” to “non-member state.” Marko Djurica / Reuters

The resolution, which lifts the Palestinian Authority’s U.N. observer status from “entity” to “non-member state,” like the Vatican possesses, easily passed the 193-nation General Assembly with 138 nations voting in favor, and nine opposed, including the United States. Forty-one countries abstained, including the United Kingdom.

Israel, the United States and the other members who opposed the resolution see it as a largely symbolic and counterproductive move by the Palestinians. The vote took place on the 65th anniversary of the assembly’s adoption of resolution 181 on the partition of Palestine into Jewish and Arab states.

Israel, the United States and the other members who opposed the resolution see it as a largely symbolic and counterproductive move by the Palestinians. The vote took place on the 65th anniversary of the assembly’s adoption of resolution 181 on the partition of Palestine into Jewish and Arab states.

Palestinian President Mahmoud Abbas has led the campaign to win support for the resolution, which follows an eight-day conflict this month between Israel and Islamists in the Gaza Strip, who are pledged to Israel’s destruction and oppose his efforts toward a negotiated peace.

The U.S. State Department made a last-ditch effort to get Abbas to reconsider, but the Palestinian Authority, which exercises limited self-rule in the Israeli-occupied West Bank, held firm.

Secretary of State Hillary Clinton, speaking at the Brookings Institution on Thursday, said the U.S. believes the resolution will “do nothing to advance the peace and the two-state solution we all want to see.”

She noted that while the U.S. plans to vote “no,” but played down differences with key diplomatic partners in Europe, including France, which were expected to vote in favor of the resolution.

“We and our European partners agree on the most fundamental issues and share a common objective — two states living side-by-side living in peace and security,” Clinton said.

Susan Rice, the U.S. ambassador to the U.N., said in a statement after the vote that “the only way to establish such a Palestinian state and resolve all permanent-status issues is through the crucial, if painful, work of direct negotiations between the parties.”

“The United States therefore calls upon both the parties to resume direct talks without preconditions on all the issues that divide them,” Rice said.

The U.K. had committed to voting for the resolution if Abbas had shown commitment to resuming peace negotiations without preconditions. Lacking that assurance, Britain abstained from the vote.

Following the vote at the UN General Assembly the Britain’s Foreign Secretary William Hague said: “We continue to believe that the prospects for a swift return to negotiations on a two state solution — the only way to create a Palestinian state on the ground — would be greater today if President Abbas had been able to give the assurances we suggested, and without which we were unable to vote in favor of the resolution.

“Nonetheless, we will redouble our efforts to restart the peace process, and will continue our strong support for President Abbas, the Palestinian Authority, and a two state solution,” he said.

Despite its fierce opposition, Israel made efforts that appeared designed to prevent diplomatic isolation. In recent days, it toned down threats of retaliation in the face of wide international support for the initiative, notably among its European allies.

“The decision at the United Nations will change nothing on the ground,” Israeli Prime Minister Benjamin Netanyahu said in Jerusalem. “It will not advance the establishment of a Palestinian state. It will delay it further.”

But U.N. diplomats say that Israel’s reaction might not be so measured if the Palestinians seek ICC action against Israel on charges of war crimes, crimes against humanity or other crimes the court would have jurisdiction over.

Granting Palestinians the title of “non-member observer state” falls short of full U.N. membership — something the Palestinians failed to achieve last year. But it does allow them access to the International Criminal Court and other international bodies, should they choose to join them.

Speaking at an annual U.N. event in support of the Palestinians, Palestinian Foreign Minister Riyad al-Maliki appealed to U.N. member states to support Thursday’s U.N. resolution. He also repeated his support for peace with Israel.

“Despite diminishing hopes and the decline of the situation on the ground due to Israel violations, we remain committed to the two-state solution and our hand remains extended in peace,” he said at U.N. headquarters in New York.

State Department spokeswoman Victoria Nuland reiterated U.S. warnings that the move could cause a reduction of U.S. economic support for the Palestinians. The Israelis have also warned they might take significant deductions out of monthly transfers of duties that Israel collects on the Palestinians’ behalf.

Russian Deputy Foreign Minister Mikhail Bogdanov was quoted by the Interfax news agency as calling on Washington and Israel to avoid “any hasty and destructive decisions.”

“Supporting the Palestinian authorities is not only in the interest of the Palestinian side, but also of Israel and the whole international community that is longing for a peaceful political settlement,” he said. source – NBC News