Parents of children at an elementary school in Colorado are furious after the American flag was lowered at the multi-cultural school and replaced with a Saudi Arabian flag. As... 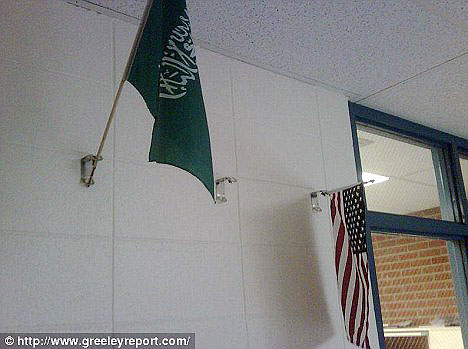 A different way to celebrate 9/11 anniversary

Parents of children at an elementary school in Colorado are furious after the American flag was lowered at the multi-cultural school and replaced with a Saudi Arabian flag. As the tenth anniversary of 9/11 approaches, someone at Bauder Elementary School in Fort Collins appears to have lowered the American symbol while raising that of the Muslim country in its place.

The flag is thought to have initially been hung at the school as one of many posted around the site in recognition of the various nationalities represented by the young students. The school’s principal insisted the flag was not raised by a member of staff in order to disrespect the American flag – and said the American flag immediately was returned to its prominent position when the issue came to his attention.

But parents argue the display was a direct violation of federal law, which states: ‘No other flag or pennant should be placed above, or, if on same level, to the right of the flag of the United States of America.’

They argue it’s the result of the effect a growing Muslim population is having on the area.

A photograph of the Saudi Arabian flag was taken by a concerned local and first posted on the Greeley Report blog. source – Daily Mail UK