From Kumbaya To Chaos: How Obama Has Weakened America

Russian President Vladimir Putin continued a war of words with Obama and the U.S. over Syria, calling its policy weak and lacking in objectives as his air force carried... 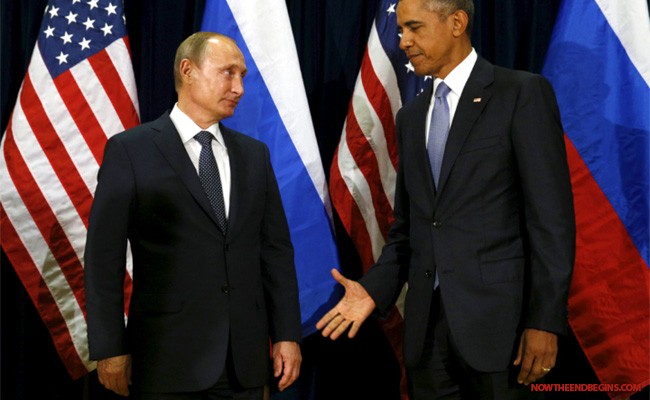 Under Barack Obama, America is neither feared nor respected

Muslim-raised Barack Hussein Obama boldly declared 5 days before the 2008 elections that if he was president, even the rising of the oceans would cease. He stood in the Brandenburg Gate in Germany, and declared himself to be a “citizen of the world”, ushering in new era of global peace and prosperity. But 7 years later, the reality is that America is head-over-heels in debt, with a weakened military and no cohesive foreign policy. This has made our enemies very, very bold, and make no mistake about it, those enemies are about to test our resolve in a very big way. Obama promised a “fundamental transformation of America”, and on that he has absolutely delivered.

“If the US encroaches on China’s core interests, the Chinese military will stand up and use force to stop it,” the paper warned.

Chinese media criticised the US on Thursday for “ceaseless provocations” in the South China Sea, with Washington expected to soon send warships close to artificial islands Beijing has built in disputed waters.

An editorial in the Global Times, which is close to China’s ruling Communist party, condemned US “coercion”, adding: “China mustn’t tolerate rampant US violations of China’s adjacent waters and the skies over those expanding islands.”

A picture is still worth a thousands words, this one speaks quite loudly

It said China’s military should “be ready to launch countermeasures according to Washington’s level of provocation”. “If the US encroaches on China’s core interests, the Chinese military will stand up and use force to stop it,” the paper warned.

Russian President Vladimir Putin continued a war of words with the U.S. over Syria, calling its policy weak and lacking in objectives as his air force carried out fresh bombing raids in support of Syrian leader Bashar al-Assad.

“I don’t really understand how the U.S. can criticize Russia’s actions in Syria if they refuse to have direct dialogue,” Putin told reporters Thursday during a visit to Astana, Kazakhstan. “The basic weakness of the American position is that they don’t have an agenda, though we’re keeping the door open” for high-level discussions with Washington, he said.

Obama’s America in 2015 is a nation in retreat, hopelessly indecisive, and appeasing our enemies. We are importing over 250,000 Muslim migrants every year, the vast majority of whom are jihadi terrorists. Iran is about to get the bomb and we are helping them to do it. We are a nation that is ripe for destruction, and our enemies know it. That”smacking sound” you are hearing is the sound of them licking their lips in anticipation of taking the spoil.