Former President Jimmy Carter says he supports the Palestinians' effort to gain international recognition of their independence at the United Nations this month. The Georgia Democrat said Tuesday he... 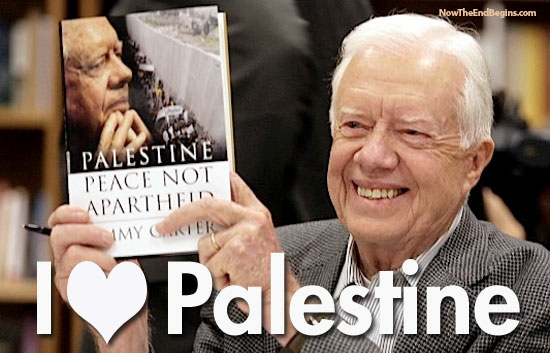 In the mind of Jimmy Carter, Israel is always the bad guy
by Geoffrey Grider September 13, 2011
NOW THE END BEGINS SHARE:

Yes on Palestine, No on Israel

ATLANTA (AP) – Former President Jimmy Carter says he supports the Palestinians’ effort to gain international recognition of their independence at the United Nations this month.

In the mind of Jimmy Carter, Israel is always the bad guy

The Georgia Democrat said Tuesday he wouldn’t be in favor of the Palestinians’ appeal to the U.N. if the White House had “put forward any sort of comprehensive peace proposal.” But he said Palestinians have few other options since no deal is in the works.

He said: “As an alternative to a deadlock and a stalemate now, we reluctantly support the Palestinian move for recognition.”

Palestinian President Mahmoud Abbas is set to address the U.N. next week and ask the world to recognize a Palestinian state, despite concerns from some quarters that it could provoke a regional meltdown and further isolate Israel. source – Breitbart