Why are the college records, of a 51-year-old President of the United States, so important to keep secret? Why has Obama spent millions to keep them sealed? I think... 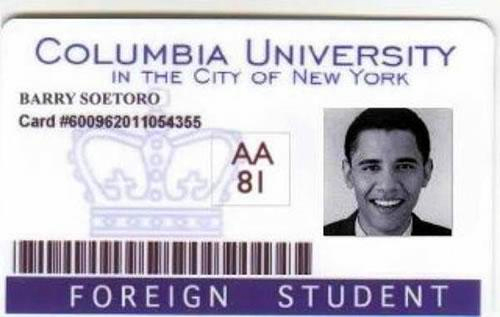 None of the classmates that I knew at Columbia has ever met him, saw him, or heard of him.
by Geoffrey Grider August 7, 2012
NOW THE END BEGINS SHARE:

Obama has spent millions to seal his college records…why?

Why are the college records, of a 51-year-old President of the United States, so important to keep secret? I think I know the answer.

If anyone should have questions about Obama’s record at Columbia University, it’s me. We both graduated (according to Obama) Columbia University, Class of ’83. We were both (according to Obama) Pre-Law and Political Science majors. And I thought I knew most everyone at Columbia. I certainly thought I’d heard of all of my fellow Political Science majors. But not Obama (or as he was known then- Barry Soetoro). I never met him. Never saw him. Never even heard of him. And none of the classmates that I knew at Columbia has ever met him, saw him, or heard of him.

None of the classmates that I knew at Columbia has ever met him, saw him, or heard of him.

But don’t take my word for it. The Wall Street Journal reported in 2008 that Fox News randomly called 400 of our Columbia classmates and never found one who had ever met Obama.

Now all of this mystery could be easily and instantly dismissed if Obama released his Columbia transcripts to the media. But even after serving as President for 3 1/2 years he refuses to unseal his college records. Shouldn’t the media be as relentless in pursuit of Obama’s records as Romney’s? Shouldn’t they be digging into Obama’s past–beyond what he has written about himself–with the same boundless enthusiasm as Mitt’s?

The first question I’d ask is, if you had great grades, why would you seal your records? So let’s assume Obama got poor grades. Why not release the records? He’s President of the free world, for gosh sakes. He’s commander-in-chief of the U.S. military. Who’d care about some poor grades from three decades ago, right? So then what’s the problem? Doesn’t that make the media suspicious? Something doesn’t add up.

Secondly, if he had poor grades at Occidental, how did he get admitted to an Ivy League university in the first place? And if his grades at Columbia were awful, how’d he ever get into Harvard Law School? So again those grades must have been great, right? So why spend millions to keep them sealed?

Third, how did Obama pay for all these fancy schools without coming from a wealthy background? If he had student loans or scholarships, would he not have to maintain good grades?

I can only think of one answer that would explain this mystery.

Here’s my gut belief: Obama got a leg up by being admitted to both Occidental and Columbia as a foreign exchange student. He was raised as a young boy in Indonesia. But did his mother ever change him back to a U.S. citizen? When he returned to live with his grandparents in Hawaii or as he neared college-age preparing to apply to schools, did he ever change his citizenship back? I’m betting not.

If you could unseal Obama’s Columbia University records I believe you’d find that:

A)   He rarely ever attended class.

B)   His grades were not those typical of what we understand it takes to get into Harvard Law School.

C)   He attended Columbia as a foreign exchange student.

D)   He paid little for either undergraduate college or Harvard Law School because of foreign aid and scholarships given to a poor foreign students like this kid Barry Soetoro from Indonesia.

If you think I’m “fishing” then prove me wrong. Open up your records Mr. President. What are you afraid of?

If it’s okay for U.S. Senate Majority Leader Harry Reid to go on a fishing expedition about Romney’s taxes (even though he knows absolutely nothing about them nor will release his own), then I think I can do the same thing. But as Obama’s Columbia Class of ’83 classmate, at least I have more standing to make educated guesses.

It’s time for Mitt to go on the attack and call Obama’s bluff. source – The Blaze