Eurotunnel services were suspended on Saturday after more than 200 Muslim migrants broke into its French terminal in a “massive and organised” assault.... 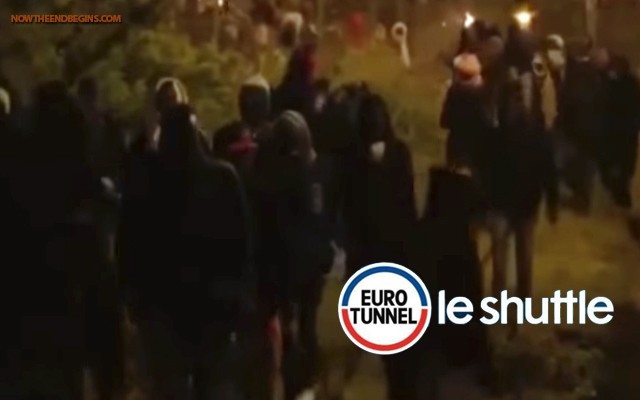 A Eurotunnel spokesman described the latest incident at its Calais terminal as a "massive invasion and intrusion by a very large and co-ordinated group".
by Geoffrey Grider October 3, 2015
NOW THE END BEGINS SHARE:

Eurotunnel services were suspended on Saturday after more than 200 Muslim migrants broke into its French terminal in a “massive and organised” assault.

EDITOR’S NOTE: As the hundreds of thousands of Muslim migrants take root across Europe in their “host” countries, the coordinated attacks are now beginning. Today Muslim jihadis pretending to be “migrants” flooded the Eurotunnel and shut down service. This is why they are there, and it is only the beginning.

Passenger and freight services through the tunnel were halted for several hours while French police struggled to contain the invasion and remove the migrants.  Two police officers and four migrants suffered minor injuries during scuffles, local authorities of the Pas-de-Calais region said.

Around 100 of the migrants managed to walk as far as 15 kilometres into the Channel Tunnel during the mass break-in before police intervened to stop them getting any further. “The migrants entered the south tunnel and went quite far, around 15 kilometres,” said the top official for the region, Fabienne Buccio.

A Eurotunnel spokesman described the latest incident at its Calais terminal as a “massive invasion and intrusion by a very large and co-ordinated group”.

He added: “It’s clearly an organised attack when it comes in such a large number; there are over 100 in this one group.

“They arrived together an in a well-organised manner, broke through the fences and all clearly knew where they were going. They are being gathered up by the police authorities.”

“While they are on the track we have, for safety reasons, to suspend the service. Once that’s done we will be able to restart”
Eurotunnel spokesman

Eurotunnel said train services were suspended for safety reasons after people were spotted on the tracks, but no passengers were trapped on trains as a result of the incident.

“While they are on the track we have, for safety reasons, to suspend the service. Once that’s done we will be able to restart,” said the spokesman, adding: “It’s a very co-ordinated and well-managed process but it’s a very large group of people and it’s dark so it will have to be done very carefully.”

The company has recently implemented extra security to try to prevent migrants getting onto the tracks, forcing migrants into attempt more desperate or organised attempts to gain access to the terminal and trains.

The spokesman said: “Quite probably because the security at the tunnel is strengthening every day, with the new fences being put up, new security installations and additional staff, it’s becoming much harder for migrants to get through in small numbers.

“This looks like quite a carefully co-ordinated and organised attack, possibly to raise the profile of their situation or as last-ditch attempt before the new fences are up.”

As Eurotunnel staff attempted to eject the Muslim migrants others were photographed clambering on to lorries on the approach road to the terminal, outside the northern French port.

Two men were seen on the cab roof of one lorry trying, with others climbing into the back of another lorry loaded with cardboard boxes. Another two men were pictured trying to hide on the roof of a camper van by crawling between a canoe and a luggage box.

At the same time large numbers of migrants, mainly men, continued to make their way on foot towards the terminal along the motorway, slowing freight lorries to a crawl. Some strung tape across the road in a bid to stop lorries and climb onto them. source