Every minute of every day, 2.1 Muslim migrants legally enter our borders and are given legal immigrant status by the Obama administration. Thats’ 3,024 Muslims every 24 hours.... 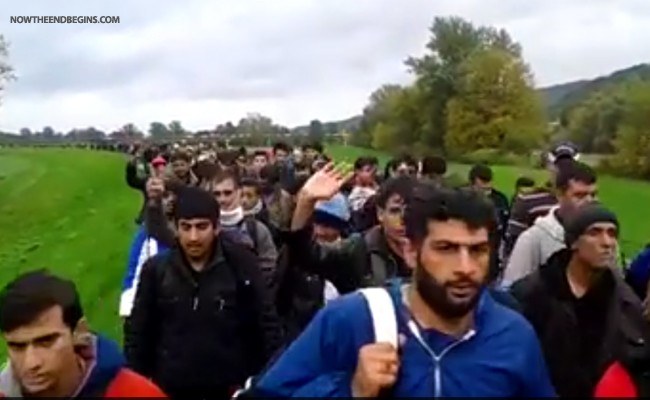 Every minute of every day, 2.1 Muslim migrants legally enter our borders and are given legal immigrant status by the Obama administration.  Thats’ 3,024 Muslims every 24 hours.

Last month, the world watched in opened mouth horror as wave after wave of Muslim migrants entered illegally over the borders of Hungary, Poland, Germany, Spain and Italy. NTEB correctly told you that a minute fraction of these people were actual Syrian refugees, with the majority of them being male, Jihadi militants connected with Al Qaeda and ISIS. As further proof, now comes the latest video of the jihadi march to Austria, which you see in the video below. Hopefully the Austrian government will have the good sense to have the Austrian army waiting there on the border to greet them.

It has only been 6 weeks since the invasions began, and already the devastating effects are being seen and felt. Germany has become a garbage pail of filth and disease as the teeming hordes of angry jihadis choke the German streets, demanding benefits. In Poland, angry citizens betrayed by their own government demand an end to this illegal immigration. In Calais, France, home to what is now Europe’s largest refugee camp, Muslims stormed the Channel Tunnel and shut down train service. All this started, you will recall, with Pope Francis ordering all Catholic in Europe to “take in and shelter Muslim migrants”. But they have saved the best for America.

This is why Hungary erected a  massive border fence and kicked these jihadis out of their country. Obama on the other hand is bussing them in at the rate of over 3,000 per day.

Every minute of every day, 2.1 Muslim migrants legally enter our borders and are given legal immigrant status by the Obama administration.  Thats’ 3,024 Muslims every 24 hours. An estimated 40% of all these “migrants” have terror ties with ISIS and Al Qaeda. This is a form of Islamic jihad known as Hijrah, where Muslims travel to non-Muslim nations and take it over by swelling the their ranks. Once it reaches a critical mass it cannot be stopped. They don’t need terror weapons, they just breed until there are more of them then there are of us. Muslims never, ever assimilate into the nations in which they live. They take it over and conquer their host country for Allah.

What you see happening right now in Europe is what will be happening in America within the next 12-18 months. If you can speak Arabic, thank a Democrat.