About the Muslim migrants, Hungarian Prime Minister Viktor Orban said 'They are over-running us...They're not just banging on the door, they're breaking the doors down on top of us,'... 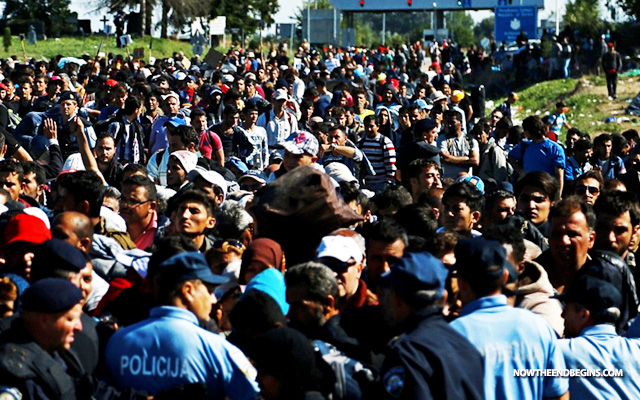 EDITOR’S NOTE: Jihad has been proclaimed on Europe and from the looks of things, the Muslims are winning handily . Day after day they arrive, endless waves of hostile, angry, Muslims pretending to be “refugees” from Syria. In fact, only 20 % of all Muslim migrants are actually people fleeing the fighting in Syria. 80% of them are Muslim jihadis. Europe cannot win and will not win because they do not possess the collective will to identify and label Islam for the evil that it truly is. Pay attention, America, we are up next. Obama is stocking all of the contiguous 48 states with hordes of Muslim jihadis who will attack when the signal is given.

Thousands of Muslim migrants continued to arrive in the Balkans today, despite the Hungarian government posting adverts in Lebanese and Jordanian newspapers warning them that entering the country illegally is a crime punishable by imprisonment.

Speaking shortly before the Hungarian parliament voted to give the army additional powers to deal with the migrant crisis, Prime Minister Viktor Orban said ‘They are over-running us…They’re not just banging on the door, they’re breaking the doors down on top of us,’ he said.

In a full-page advertisement in several newspapers, including Lebanon’s leading An-Nahar and Jordan’s Al-Rai, the government said ‘the strongest possible action is taken’ against people who attempt to enter Hungary illegally.

This afternoon Hungarian Prime Minister Viktor Orban followed up the adverts with incendiary language, insisting that Europe’s borders are threatened by the refugees, who he claimed were ‘breaking down the doors’. He subsequently granted the Hungarian army additional powers to deal with the crisis.

Thomas de Maiziere said his ‘personal initiative’ would see ‘generous’ EU quotas to bring in refugees from crisis-hit regions and spread them around the continent. If the quotas are exceeded, his plan is still to rescue those in need, but to take them to ‘safe regions’ outside Europe.

But still they keep coming. For many fleeing violence and poverty in the Middle East, Asia and Africa, Hungary is the easiest-to-reach member of the Schengen Zone – the 26 European countries that have abolished passport and border controls at their common borders – effectively allowing refugees to travel on to more desirable Western European countries, such as Germany and Sweden.

Speaking shortly before the Hungarian parliament voted to give the army additional powers to deal with the migrant crisis, Prime Minister Viktor Orban used incendiary language to talk up the threat posed to Europe by the refugees. source