Both Cairo and Amman are keeping quiet about the resumption of supplies through the Sinai pipeline which was sabotaged five times since the Egyptian revolution in February. Jordan has... 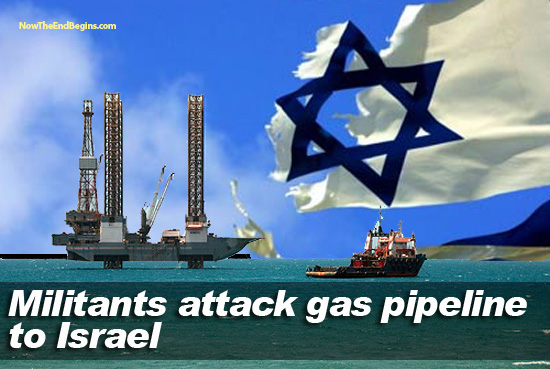 Both Cairo and Amman are keeping quiet about the resumption of supplies through the Sinai pipeline which was sabotaged five times since the Egyptian revolution in February. Jordan has agreed to top up payment for the gas by an extra $250 million, but Cairo has broken off negotiations with Jerusalem on new prices so making sure that supplies to Israel are cut off for good.

That is not the only cause for concern about the state of peace ties between Egypt and Israel. While Israeli officials optimistically forecast the early reopening of the Israeli embassy in Cairo after it was wrecked 10 days ago by a radical Islamic mob, officials in Cairo quickly put a damper on this forecast by announcing that the Israeli ambassador would not return to Cairo any time soon.

And in a symbolic snub, the military junta banned the traditional export to Israel of palm fronds for the Four Species blessing on the Sukkot festival next month. Last year, Israel imported 650,000 palm fronds from northern Sinai.
The Prime Minister’s Office and defense officials shy away from admitting that relations with the Supreme Military Council ruling Egypt are going from bad to worse. They explain that the new rulers are just wary of stirring up the masses for more uncontrolled outbreaks like the mob assault on the Israeli embassy on Sept. 10.
Israeli sources have also tried to find a ray of light in the ban the Supreme Council imposed this week on the radical Gama’a al-Islamiya running for election in the first post-Mubarak parliamentary votes in November.

However, debkafile’s sources stress that this ban has nothing to do with easing relations with Israel. The generals are simply scared of the Islamist fundamentalists gathering momentum for armed resistance to their own rule.

As one informed Western observer put it: The military rulers used the Israeli embassy break-in as the pretext for restoring Hosni Mubarak’s emergency regulations while at the same time downgrading Egyptian-Israeli ties in controlled stages so as to avoid drawing Western attention.

The flow of Egyptian gas through Sinai was made possible only after Israel permitted Egypt to post troops in demilitarized Sinai to safeguard the pipeline against more sabotage. The irony of the situation is that the gas is being pumped through to Jordan while Israel is deprived.
The Egyptian junta is equally cynical and nonchalant about security in Sinai, especially along the border with Israel.
Since the terrorist attack from Sinai on the Eilat highway on Aug. 18, which left 8 Israelis dead, beefed up Egyptian forces have not carried out a single operation against the thousands of terrorists loose in the peninsula, including al Qaeda cells, likeminded jihadi networks and Palestinian gunmen. Nothing has changed except for a few scattered roadblocks.

Indeed, the Egyptian junta’s claims of operations for purging northern Sinai of armed gangs and destroying weapons smuggling tunnels into the Gaza Strip were just make-believe. It concealed Cairo’s renunciation of responsibility for security in the lawless peninsula and the Israeli border region, transferring it to the indigenous Bedouin tribes, together with a large measure of autonomy, in deals they struck with the local chiefs.

No responsible force is therefore around to chase back to the Gaza Strip a Palestinian Jihad Islami gang of 30 armed terrorists hanging about the Egyptian-Israeli border since Aug. 25 waiting for the right moment to cross over for a multiple attack inside Israel. They have felt free to rotate gang members with fresh gunmen without being harassed.
To avoid putting any strain on the weakening ties with Cairo, Israel’s government has not complained about the month-long terror alert which has suspended highway traffic and public transport between northern and southern Israel; nor about the need to redeploy the Golan Brigade from the Syrian border to the South for an indefinite assignment against the next cross-border terrorist attack from Egypt.

A senior army officer told debkafile that never before has Israel massed thousands of soldiers in one place for so long against a threat posed by a score and a half of terrorists. source – DEBKA