Egypt and Israel Edge Closer To War As Tensions Escalate

Diplomats scrambled to avert a crisis in relations between Egypt and Israel on Saturday, and the Israeli government issued a rare statement of regret for the killing of three... 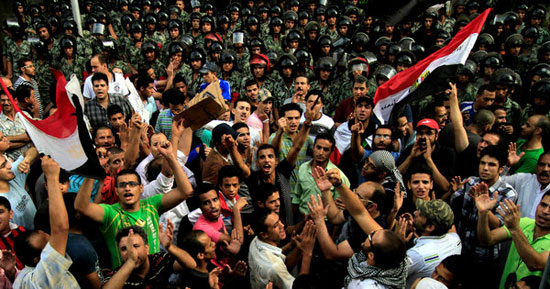 Egyptians protested at the Israeli Embassy in Cairo on Saturday as envoys raced to repair relations between the two nations.
by Geoffrey Grider August 21, 2011
NOW THE END BEGINS SHARE:

Nations Race to Defuse Crisis Between Egypt and Israel

CAIRO — Diplomats scrambled to avert a crisis in relations between Egypt and Israel on Saturday, and the Israeli government issued a rare statement of regret for the killing of three Egyptian security officers by an Israeli warplane.

Egyptians protested at the Israeli Embassy in Cairo on Saturday as envoys raced to repair relations between the two nations.

Tensions between the two countries, which on Saturday led Egypt to announce that it would recall its ambassador from Tel Aviv, reached the worst point since the Camp David peace accords three decades ago, spurred by a burst of violence along their shared border in the Sinai Peninsula. A series of attacks there killed eight Israelis on Thursday; the Israeli government then retaliated against Gaza-based militants, and the three Egyptians died in the crossfire.

After Egypt’s announcement about its ambassador early Saturday, diplomats from other nations rushed to broker an end to the impasse between the Egyptians and the Israelis, a Western diplomat said, speaking on condition of anonymity because of the delicacy of the talks.

Breaking a customary silence on the Sabbath, the Israeli defense minister, Ehud Barak, released a statement saying, “We regret the deaths of members of the Egyptian security forces during the terror attack on the Israeli-Egyptian border.”

Later Saturday, the Egyptian cabinet rejected the comments, saying the statement did not go far enough in accepting responsibility. Still, the cabinet reaffirmed its commitment to peace.

Mr. Barak, who had seemed on Thursday to blame lax Egyptian security for allowing the attacks near the border, said that after an internal inquiry, an Israeli-Egyptian committee would investigate. The Egyptian cabinet, in its response, welcomed the idea.

In Cairo, thousands of protesters demonstrated for a second night outside the Israeli Embassy on Saturday, demanding the expulsion of the ambassador. One climbed up the building and took down the Israeli flag, drawing cheers from the crowd.

The crisis has been the sharpest signal yet that the revolution that toppled President Hosni Mubarak in February is transforming the three-decade-old relationship between Egypt and Israel that has been the cornerstone of Middle Eastern politics.

By removing Mr. Mubarak’s authoritarian but dependably loyal government, the revolution has stripped away a bulwark of Israel’s position in the region, unleashing the Egyptian public’s pent-up anger at Israel over its treatment of the Palestinians at a time when a transitional government is scrambling to maintain its own legitimacy in the streets.

Mohamed Bassiouni, a former Egyptian ambassador to Israel, called the episode a lesson to Israel about the new politics of a more democratic Egypt, where the ruling military council and aspiring political candidates are eager to stay in step.

“It is very important, because you see public opinion in Egypt,” Mr. Bassiouni said.

He added: “The Egyptians do not accept what has happened, and it means that Israel should take care. If they continue their behavior toward the Palestinians and the peace process, it means that the situation will escalate more.” source – NY Times