Doritos Rainbows are a limited-edition version of its Cool Ranch-flavored tortilla chips to show the chipmaker’s support of the LGBT community. ... 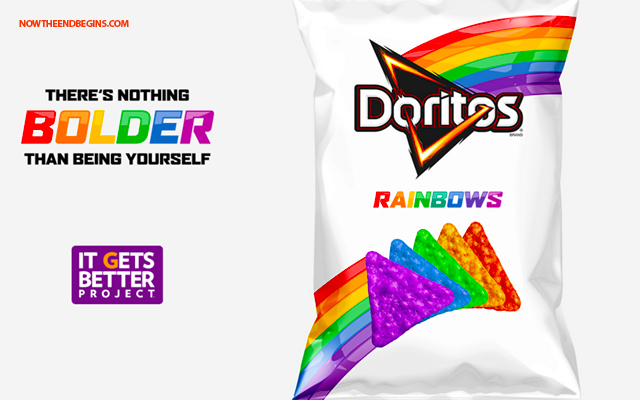 “There’s nothing bolder than being yourself,” the company declares on the package.
by Geoffrey Grider September 17, 2015
NOW THE END BEGINS SHARE:

Doritos is producing rainbow-colored chips in partnership with nonprofit It Gets Better.

“And she named the child Ichabod, saying, The glory is departed from Israel…” 1 Samuel 4:21 (KJV)

There is simply no escaping the New World Order’s push of the radical LGBT Mafia’s agenda. Even our beloved junk food is no longer safe from it’s insidious reach. Doritos Rainbows are a limited-edition version of its Cool Ranch-flavored tortilla chips to show the chip maker’s support of the LGBT community. The chips come in shades of green, blue, purple, red, and orange inspired by colors of the Pride flag. Who are the main consumers of Doritos products? The ultra-impressionable 18-24 year old age group. No surprise there. Since gays cannot reproduce, they must indoctrinate and recruit.

“There’s nothing bolder than being yourself,” the company declares on the package.

Despite pockets of resistance in areas across the country, America as a nation has fully embraced the LGBT lifestyle and all it represents. From the United States Supreme Court, all the down to a maker of junk snack food, everywhere you look Sodom and Gomorrah are being brought back to life. We say that we are doing it to be tolerant, open-minded and inclusive, but nothing could be further from the truth. The fact is that God’s restraining Hand has been taken away, our protective covering lifted in judgment against us, and we don’t even know it.

Ichabod has been written across the doorposts of America

America in 2015 is not a Christian nation. Under Obama we have become a secular, pagan nation that worships all gods except the God of the Bible, the God of Abraham , Isaac and Jacob. We have forgotten that God completely destroyed both Sodom and Gomorrah for doing less than we are doing right now. The glory has departed from America, and we cannot see it. In the Bible, Eli the High Priest of Israel, and his two wicked sons Hophni and Phinehas, brought God’s judgment upon their nation because of their actions. When Phinehas wife died giving birth to his child, they named the boy Ichabod, which means that the glory, God’s glory, had departed from Israel. That’s exactly where America stands right now. We are so used to having God’s blessing, favor and protection, which has made us the mightest nation on earth, that we have taken it totally for granted. We think we will always remain on top, but the wolf is already at our door.

Think that God thinks that “all love is love”? Click to find out…

We elected a Muslim president who right now, at this very moment, is flooding America with tens of thousands of ISIS war fighters. Obama calls them Muslim migrants, and they are being shipped to every state in our nation. What you are now seeing in Europe is only a very short time away from being an everyday reality here in America. Have you ever read how God judged nations in the Bible? He raised up other nations against them. What’s that, you say? You cannot imagine America overrun with Muslims and beheadings happening daily on our streets? Just think about that while you break open a nice, big bag of Doritos Rainbows chips. Just think about the myriad of health issues with artificial rainbow-colored food items.

“And he looked toward Sodom and Gomorrah, and toward all the land of the plain, and beheld, and, lo, the smoke of the country went up as the smoke of a furnace.” Genesis 19:28 (KJV)

So eat up, America, stuff your face with cancer-causing junk food that glorifies the Satanic LGBT Agenda, force the states to perform same-sex sodomite marriage ceremonies, and keep killing millions of babies each year and sell their limbs for financial gain.

Because Judgement Day is coming.