On Sunday's episode of Good Luck Charlie, children all across America who tuned in were smacked in the face with a lesbian couple.... 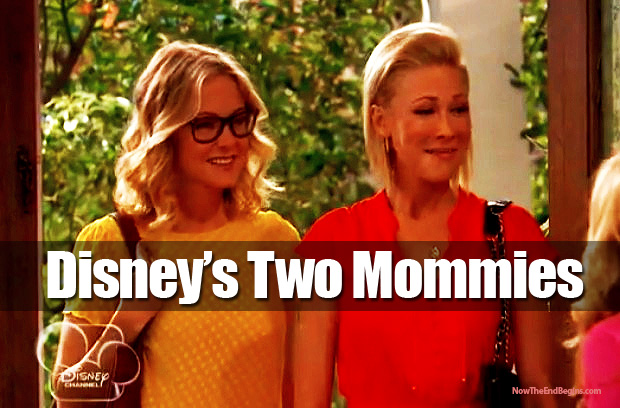 Now that Walt Disney Corporation has spent the last few generations getting you hooked on their “wholesome, family entertainment”, they are now using that relationship to teach your precious children that the LGBT way of life is just a preference. The bible says that it is an abomination before God. What do you say?

“For this cause God gave them up unto vile affections: for even their women did change the natural use into that which is against nature: And likewise also the men, leaving the natural use of the woman, burned in their lust one toward another; men with men working that which is unseemly, and receiving in themselves that recompence of their error which was meet.” Romans 1

The Blaze: News spread last summer that the Disney Channel was planning to introduce a lesbian couple for the first time on one of its children’s TV programs. That’s exactly what happened during Sunday’s episode of “Good Luck Charlie,” when a child with two mothers was prominently highlighted.

The scene featured Charlie, the main character, sitting in the living room with her father Bob (played by actor Eric Allen Kramer) and her mother Amy (played by Leigh Allyn Baker) discussing a play date that was set up with Charlie’s friend Taylor.

When Amy told Bob that Taylor’s parents would also be joining them while the girls played, the two began debating Taylor’s mother’s name. Both said they had individually met the woman, but while Amy said her name was Susan, Bob remembered meeting a parent named Cheryl.

Since they weren’t together at the time of the interactions, the two remained at odds. When the doorbell finally rang and Taylor arrived with her mothers, Charlie’s parents realized that they were both right: Susan and Bob were, indeed, speaking about two separate women.

“Taylor has two moms,” Bob said after answering the door.

“Nothing gets past you, Bob,” Amy said.

The same-sex scene had long been anticipated. A representative for Disney detailed last summer how the network carefully approached the subject.

“This particular story line was developed under the consultancy of child development experts and community advisers,” the Disney representative said. “Like all Disney Channel programming, it was developed to be relevant to kids and families around the world and to reflect themes of diversity and inclusiveness.”

Conservative advocacy groups quickly spoke out against the move, with the organization One Million Moms decrying the decision to include a lesbian couple in one of the network’s shows (the series finale of “Good Luck Charlie” is scheduled for next month).

“Just because something may be legal or because some are choosing a lifestyle doesn’t make it morally correct. Disney should stick to entertaining instead of pushing an agenda,” the group said in a statement. “Disney decided to be politically correct versus providing family-friendly programming.” source – Blaze