Did Obama Make A Deal With Iran To Hand Over Israel In Exchange For Bin Laden?

Amazing video from Pastor James David Manning from 2008...and it's right on the money. Pastor Manning goes into great detail about a deal that would be struck in 2011... 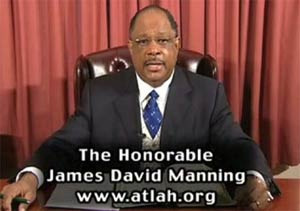 Earlier today, we wrote on the quickie at sea burial of Bin Laden by the Obama administration, and asked out loud if perhaps the whole thing was a fake. We truly believe that, in the face of lack of proof, that these questions should be asked. But let’s imagine for a moment that Bin Laden really was killed. Was a deal in place from 3 years ago between Obama and Iran to give up Bin Laden in exchange for America siding with the Palestinians on Jerusalem? Pastor James David Manning thought so way back in 2008.

Amazing video from Pastor James David Manning from 2008…and it’s right on the money. Pastor Manning goes into great detail about a deal that would be struck in 2011 where Iran would sell out Bin Laden to Obama if Obama agreed to hand over Israel to the Muslims.

The place to watch for the next coming few months will be any pronouncements coming from Secretary of State Hillary Clinton regarding the Israeli-Palestinian peace treaty.