Obviously, something is very, very wrong here at the Denver International Airport. It is filled with symbols of the occult, of the Devil, and put all together they seem to urging the viewer to 'figure it out.' It like the crime scene for a crime yet to be perpetrated. Is it a coded message of a coming holocaust of unimaginable proportions?

“YOU MAY OR MAY NOT HAVE HEARD. DEN’S GOT SOME SECRETS,” reads a section of the airport’s official website titled “DEN Files,” before launching into a full explanation of the various myths.

The most amazing thing about the Denver International Airport (DIA) is not that it is filled to the brim with very freaky occultic symbols everywhere you look, it’s that it is everywhere you look. Instead of trying to hide them, or be clever about it, these works of darkness are on bold display, daring you to figure them out. And there is no question of any kind that all these symbols do indeed tell a story that is yet to be realized. The story of an evil, tragic coming holocaust. Do I have your attention?

Obviously, something is very, very wrong here at the Denver International Airport. It is filled with symbols of the occult, of the Devil, and put all together they seem to urging the viewer to ‘figure it out.’ It like the crime scene for a crime yet to be perpetrated. Prophecy watchers now this is all preparation for the coming time of Jacob’s trouble after the Pretribulation Rapture of the Church takes place.

Some of the occult, creepy and scary New World Order elements of the Denver Airport include but are not limited to a demoic, angry attacking horse that greets travellers when they arrive, locals have nicknamed it ‘Blucifer‘. There is a dedication stone that says DIA was built by the ‘New World Airport Commission‘, yet there are no records of any such group every existing. In the middle of the stone is the masonic symbol of Freemasonry.

Last but not least, there are the hideous murals that look like George Orwell’s ‘1984’ and the ‘Left Behind’ series mated and had a baby. Take a look for yourself and tell me how you view this mess. In order for you to fully understand what they are doing with the Talking Gargoyle, you need to see what they have already done so far.

The Creepy New World Order Artwork At The Denver Airport

The lord of Death killing the dove of peace: A long, long trail of mothers holding dead babies in their arms, many more lying dead on the ground, as a faceless, evil warlord holds a huge sword and a machine gun, thrusting the sword into the belly of the white dove of peace. Notice, too, that the evil warlord doing the killing is a military soldier, a reference to the coming United Global police state perhaps? Notice the symbol of the radical Gay Agenda, a multi-colored rainbow, as the banner under which this madman is slaughtering people. 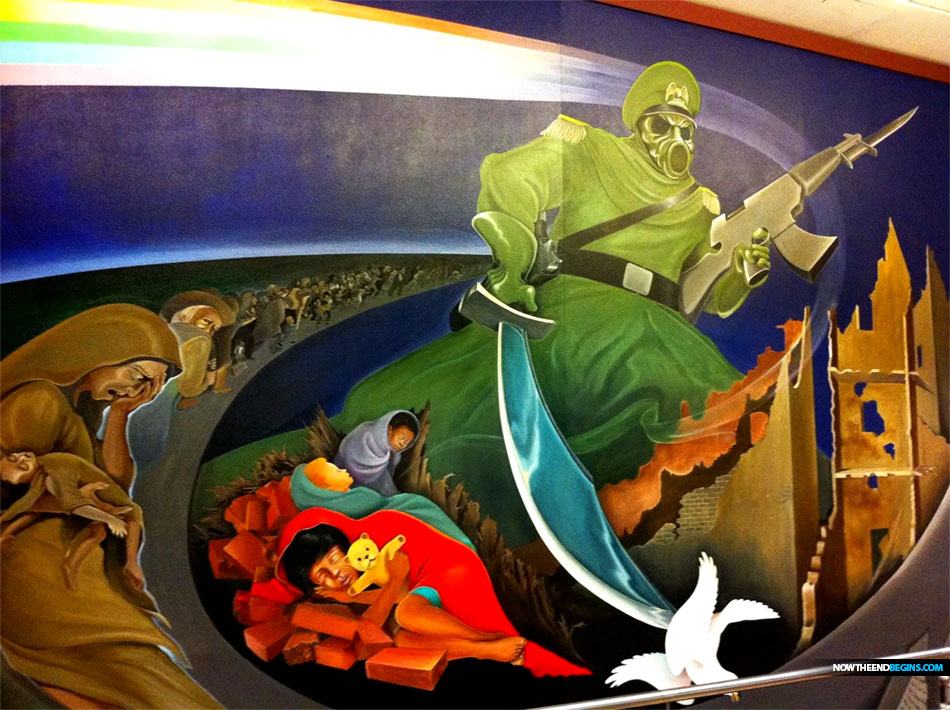 ASK YOURSELF IF THIS IS WHAT YOU WANT TO SEE RIGHT BEFORE YOU BOARD AN AIRPLANE?

Are they showing us the New Age, the New World Order, GAIA, the occult, the Illuminati…or a little bit of each? Hmm…With names like “In Peace and Harmony With Nature” and “The Children of the World Dream of Peace“, they depicted – the artist said – the triumph of environmentalism and peace over war and destruction. Be honest, what does this look like to you? I will tell you what I see. I see the New World Order of Antichrist slaughtering any and all who refuse to take the Mark of the Beast, that’s what I see. 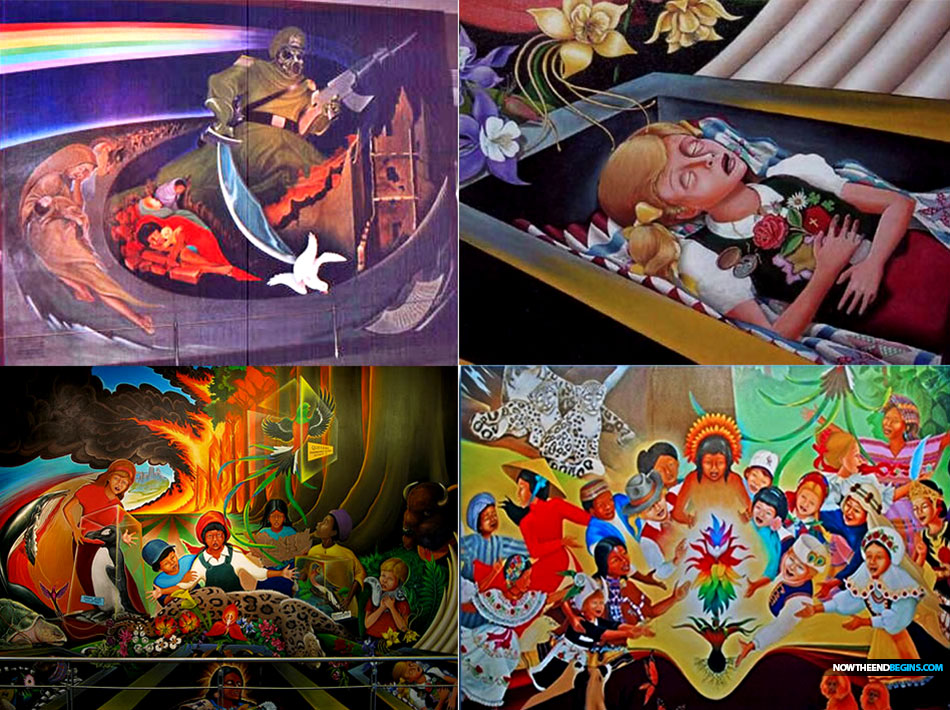 Now that we have gotten you up to speed with the all important DIA backstory, we come to the focus of today’s story, the Talking Gargoyle. After being hammered and exposed for all their slimy sinisterness, the marketing pros at DIA have decided to embrace their reputation with a talking gargoyle that mocks people who rightly think the Denver Airport is an evil place.

FROM USA TODAY: Denver International Airport, already known for being home to some wild conspiracy theories, just got a little bit weirder. A new talking gargoyle, commissioned for the airport’s 24th birthday, turned heads in a promotional video posted Thursday.

“What, you’ve never seen a talking gargoyle before?” the gargoyle asks a surprised patron. “Welcome to Illuminati Headquarters – I mean, Denver International Airport.”

With the talking gargoyle, Denver airport seems to be leaning into its reputation as keeper of conspiracy theories.You name a wild rumor, someone has attached it to the airport, from  evidence of aliens, to, yes, the Illuminati.

“We decided a few years ago that rather than fight all of this and try and convince everybody there’s nothing really going on, let’s have some fun with it,” Heath Montgomery, then the airport’s senior public information officer, told the Denver Post in 2016.

“YOU MAY OR MAY NOT HAVE HEARD. DEN’S GOT SOME SECRETS,” reads a section of the airport’s official website titled “DEN Files,” before launching into a full explanation of the various myths.

Why have a gargoyle in the airport? “Oh, it’s because of the conspiracy,” one traveler mused in the gargoyle video.

” ‘Oh, it’s because of the conspiracy, I’m a little know-it-all!’ ” the animatronic gargoyle shot back. “Will you get back here? I have a question about this conspiracy.”

When asked about his age, the gargoyle told another traveler he was 243 years old and still works out “all the time.”

Some thought the gimmick was hilarious, a few had their faces buried in phones and missed it altogether, while others just seemed baffled.

“You know, you can actually put the phone down and have a conversation with me,” he quipped at a young woman holding up her phone. “But, ‘no, I’m a millennial, I’ve got to post it, I’ve got to snap-face it and Twitter-book it,” he joked. READ MORE