At a congressional hearing on Muslim radicalization in U.S. prisons, Rep. Sheila Jackson Lee (D-Texas) said that investigators needed to analyze Christian militants in America because they too might... 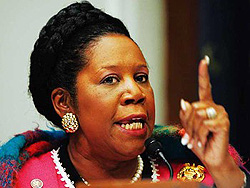 Christians are the real threat, not Islam

At a congressional hearing on Muslim radicalization in U.S. prisons, Rep. Sheila Jackson Lee (D-Texas) said that investigators needed to analyze Christian militants in America because they too might try to “bring down the country.”

In an exchange with witness Patrick Dunleavy, the former deputy inspector of the criminal intelligence unit, New York Department of Correctional Services, Rep. Jackson Lee mentioned the case of a man who blew up an abortion clinic and proposed that this perhaps was an attempt to undermine U.S. law that allows a woman to procure an abortion.

Rep. Lee then said, “As we look to be informational, we should include an analysis of how Christian militants or others might bring down the country. We have to look broadly, do we not?”

Dunleavy answered: “I don’t know that Christian militants have foreign country backing or foreign country financing.” Lee then said, “I don’t think that’s the issue. The issue is whether or not their intent is to undermine the laws of this nation. And I think it is clear that that is the case. So it’s not — your distinction is not answering the question.” source – CNS