Day of Rage! Is The Arab Spring About To Land In The US?

More than 1,000 demonstrators descended on New York City's Financial District on Saturday for what could be a days-long protest of what they said was corporate greed favoring the... 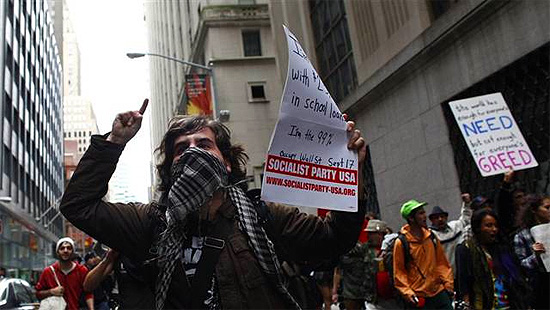 NEW YORK — More than 1,000 demonstrators descended on New York City’s Financial District on Saturday for what could be a days-long protest of what they said was corporate greed favoring the rich at the expense of ordinary people.

The rally, dubbed #OccupyWallStreet on social networks such as Twitter and Facebook where word was spread, spurred the New York Police Department to lock down Wall Street near the New York Stock Exchange and Federal Hall, local media reported.

Police set up checkpoints to allow only those who could prove they lived or worked on Wall Street to enter, the New York Daily News reported.

Pictures posted on Twitter and elsewhere showed police and barricades around the famous bronze Charging Bull statue on lower Broadway at the north end of Bowling Green park.

“A protest area was established on Broad Street at Exchange Street, next to the stock exchange, but protesters elected not to use it,” police spokesman Paul Browne said in a statement reported by The New York Times.

Demonstrators gathered in parks and plazas in Lower Manhattan and said they were determined to stay at least through the weekend so they could confront Wall Street workers on Monday morning.

Some protesters said they would stay weeks or months and likened their rally to demonstrations earlier this year in Egypt, Israel and Spain.

“It’s a worthy cause because people on Wall Street are blood-sucking warmongers,” Bill Steyerd, 68, a Vietnam veteran from Queens, told the New York Daily News. “I’m here, and in spite of these dinky barricades, we’re going to shut down Wall Street with people power.”

Counterculture magazine Adbusters and hacking group Anonymous were among the organizers asking participants to set up tents, kitchens and peaceful barricades, NY1 television station reported. Organizers hoped to draw at least 20,000 during the weekend. Satellite demonstrations were held in Los Angeles and Seattle under a Day of Rage banner, and in Barcelona, Spain, and elsewhere. source – MSNBC