In two separate criminal complaints, Egyptian lawmakers have charged Barack Obama and Hillary Clinton with conspiring with the Muslim Brotherhood... 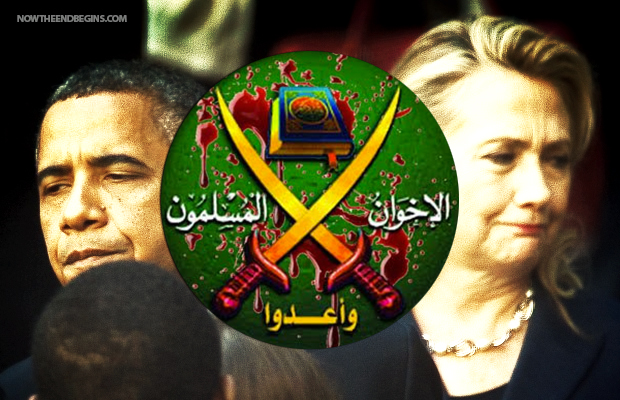 My favorite expression about Barack Obama is “Everything is calculated.” I read comments and commentaries about how inept he is — that he does not know what he is doing. Ha! Obama knows exactly what he’s doing.

Remember when BHO went on the apology tour right after he was elected in 2008? Remember when he told world leaders that America had been involved in too many countries affairs and deserved the name “The world’s policeman?”

In two separate criminal complaints, Egyptian lawmakers have charged Barack Obama and Hillary Clinton with conspiring with the Muslim Brotherhood

How in the world do you think that the so-called Arab Spring came about? Obama was a major player in this, and his Puppetmaster, George Soros, supplied the money. The plan was to destabilize the Middles East, and rid the Arabic countries of their secular governments, and replace them with the Muslim Brotherhood. That was the plan.

His diabolical plan backfired in Egypt. Not only was his great buddy, Mohamed Morsi, ousted, but he was incarcerated in 2012. He still sits in a jail cell to this day.

This is so serious to the Egyptian government, that Obama and Hillary Clinton have formal charges filed against them in Egypt.

“In two separate criminal complaints, Egyptian lawmakers have charged Barack Obama and Hillary Clinton with conspiring with the Muslim Brotherhood.”

According to one of the criminal charges, Hillary Clinton was found to be working with ousted Muslim Brotherhood president Mohammed Morsi’s wife, Naglaa Mahmood, in attempting to overthrow the current leader of Egypt, General Abdel Fatah Al-Sisi.

But this is just the tip of the iceberg.

Watch Western Center for Journalism’s exclusive video to find out all the details about the traitor in the White House, Barack Hussein Obama, and his Muslim Brotherhood collaborator, Hillary Rodham Clinton.” [1] – source

WHAT’S SO BAD ABOUT THE MUSLIM BROTHERHOOD?

Links to the Nazis began during the 1930s and were close during the Second World War, involving agitation against the British, espionage and sabotage, as well as support for terrorist activities orchestrated by Haj Amin el-Hussaini in British Mandate Palestine, as a wide range of declassified documents from the British, American and Nazi German governmental archives, as well as from personal accounts and memoires from that period, confirm. Reflecting this connection the Muslim Brotherhood also disseminated Hitler’s Mein Kampf and The Protocols of the Elders of Zion widely in Arab translations, helping to deepen and extend already existing hostile views about Jews and Western societies generally.

In November 1948 police seized an automobile containing the documents and plans of what is thought to be the Brotherhood’s `secret apparatus` with names of its members. The seizure was preceded by an assortment of bombings and assassination attempts by the apparatus. Subsequently 32 of its leaders were arrested and its offices raided. The next month the Egyptian Prime Minister, Mahmud Fahmi Nokrashi, ordered the dissolution of the Brotherhood.
On December 28, 1948 Egypt’s prime minister was assassinated by Brotherhood member and veterinary student Abdel Meguid Ahmed Hassan, in what is thought to have been retaliation for the government crackdown. A month and half later Al-Banna himself was killed in Cairo by men believed to be government agents and/or supporters of the murdered premier. Al-Banna was succeeded as head of the Brotherhood by Hassan Isma’il al-Hudaybi, a former judge.

In 1952, members of the Muslim Brotherhood are accused of taking part in arson that destroyed some “750 buildings” in downtown Cairo — mainly night clubs, theatres, hotels, and restaurants frequented by British and other foreigners — “that marked the end of the liberal, progressive, cosmopolitan” Egypt.

The Brotherhood supported the military coup that overthrew the monarchy in 1952, but the junta was unwilling to share power or lift martial law and clashed with the Brotherhood. [2] – source

It does not take a rocket scientist to clearly see that BHO and Hillary are Muslim Brotherhood operatives. People – we ARE the frogs in the pot of water, which is heated very slowly as we happily hop around. The water get a tiny bit hotter little by little. Then, without seeing it coming, we are boiled and destroyed.

It may be too late already

It most certainly may be too late for us. By that I mean that America has turned her back on God, and is so immersed in gross, unspeakable sin, that God’s judgment IS Barack Obama, and possibly Hillary Rodham Clinton in 2016.

Those of us who belong to God must pray for America. Even though it looks so bleak, our Father is waiting to hear from us:

“If my people, which are called by my name, shall humble themselves, and pray, and seek my face, and turn from their wicked ways; then will I hear from heaven, and will forgive their sin, and will heal their land.” 2 Chronicles 7:14 (KJV)