“We have a growing Muslim community in the city of New York, and their religion needs to be respected as all other religions are respected,”... 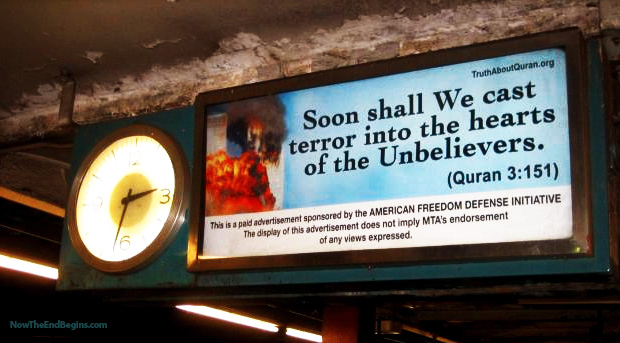 Learning nothing from history

You’ve got to hand it to New York City, they suffered horrific losses at the hands of Muslim terrorists on 9/11, and here we are 12 short years later and none of the lessons learned on that day have stuck. New York is embracing Islam, and with it Sharia Law.

The Blaze: Public schools in New York, the biggest city in the U.S., might institute days off on certain Muslim holy days, since both mayoral candidates vying for office say they support such a move.

Bill de Blasio, the Democratic candidate, and Joe Lhota, the Republican, have said Eid al-Fitr and Eid al-Adha should be added to the holiday calendar along with other major religious observations, including Christmas, Good Friday, and Rosh Hashanah, the New York Daily News reports.

Eid al-Fitr celebrates the end of the month of Ramadan, which requires dawn-to-sunset fasting, and on this day the fast is broken; Eid al-Adha honors Abraham’s willingness to sacrifice his son. The Daily News notes that an estimated 13% of New York’s pupils are Muslim.

“The origins of this nation [are] people of many different faiths coming together,” de Blasio tells the Daily News. “That’s why we have to respect Muslim faiths by providing the Eid school holidays for children in our school system.”

Lhota agrees. “We have a growing Muslim community in the city of New York, and their religion needs to be respected as all other religions are respected,” Lhota notes to the Daily News, adding that the school calendar would make up for the additional two days off if the change is made. source – The Blaze