“This is a very unusual event at the World Economic Forum, and it’s diagnostic of something much larger that is happening,” said Jon Kabat-Zinn, a molecular biologist who helped... 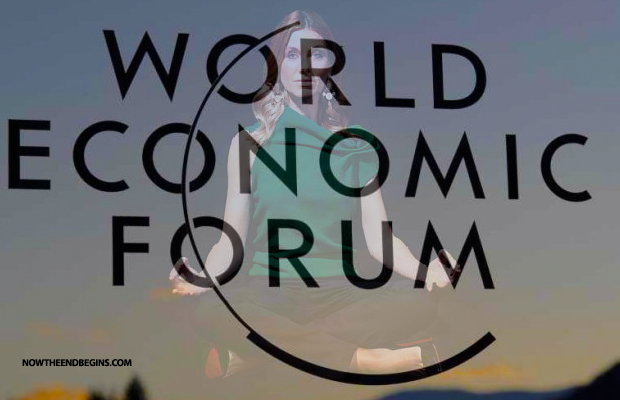 “This is a very unusual event at the World Economic Forum, and it’s diagnostic of something much larger that is happening,”

“And the rest of the men which were not killed by these plagues yet repented not of the works of their hands, that they should not worship devils, and idols of gold, and silver, and brass, and stone, and of wood: which neither can see, nor hear, nor walk:” Revelation 9:20 (KJV)

The world leaders that control the economy of nations not only want to create a One World Government, they also come with a religion as well. It is a pagan religion based on idols and the worship of self, and it has begin to openly manifest itself at the highest levels of business. That is why this year at the Davos conference, the world’s most-powerful money men and women silenced themselves and handed over control of their minds to the gods of this world. Even their own leaders, as quoted below, admit that “This is a very unusual event at the World Economic Forum”.

DAVOS, Switzerland  – For 10 minutes at the World Economic Forum here on Wednesday afternoon, a conference room jammed with more than 100 high-powered delegates was entirely silent.

The rare interlude of equanimity came during a panel called Leading Mindfully, a discussion of how meditation was impacting the workplace.

And with a mix of breathing instructions, management theory and personal reflection, the session provided a stark counterpoint to the frenzied discussions about geopolitical instability, currency fluctuations and climate change in nearby rooms.

The NEW AGE is everywhere, including the Laodicean Christian church, click to read more

“This is a very unusual event at the World Economic Forum, and it’s diagnostic of something much larger that is happening,” said Jon Kabat-Zinn, a molecular biologist who helped popularize mindfulness meditation in recent decades. “What was once considered a radical, lunatic, fringe thing has been incorporated into medicine, science, academics and more.”

In recent years, meditation has grown more prominent in the business world. Companies including General Mills, Aetna and BlackRock are teaching meditation to their employees, and students at Harvard Business School can take classes on mindful leadership.

“Even Goldman Sachs is doing it,” said William George, a member of the Goldman Sachs board who was on the panel and says hundreds of the investment banks employees regularly meditate. source – NY Times