25 Republicans in the Senate also voted in the affirmative on an amendment to fund ObamaCare, and the continuing resolution with this funding passed.... 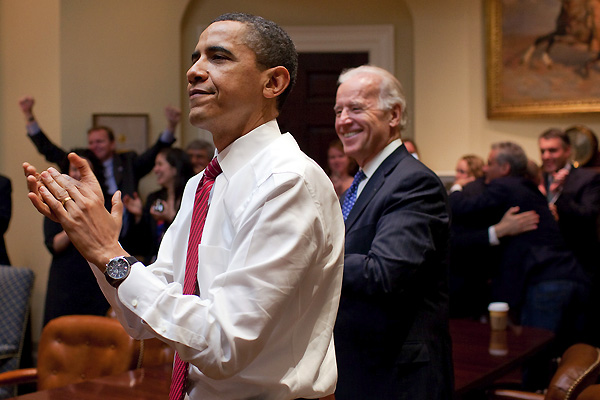 WASHINGTON, September 27, 2013 — The Senate has successfully voted in support of cloture on a bill that defunds Obamacare, moving the legislation forward in the Senate. Following that vote, the Senate also voted in the affirmative on an amendment to fund ObamaCare, and the continuing resolution with this funding passed.

“Thank you, my RINO brothers, thank you very much”

This morning during his floor speech, Sen. Dan Coats (R-IN) explained that he would not oppose cloture because he wants to “keep this process alive.” Coats asserts that a vote in support of cloture  is indeed supportive of defunding Obamacare.

Clearly, Coats failed to comprehend the magnitude of today’s vote. Sen. Cruz’s explained that supporting cloture  and ending the debate would allow Senate Majority Leader Harry Reid (D-NV) to then ‘fill the tree’ as he is permitted as Leader. Reid will add funding of Obamacare back into the bill, and it can then pass through the Senate with 51 votes. It is this simple majority vote that Cruz has been trying to avoid, knowing fully that the Senate would then produce legislation that funded Obamacare.

Sen. Mike Lee (R-UT) explained this morning, “[Voting in support of] cloture  on the House passed continuing resolution is essentially a vote to allow the Democrats to gut the House bill.” Making it clear that the Republicans should be voting differently than the Democrats, Lee continued, “That’s why Leader Reid…and every other Senate Democrat is supporting it.”

Unfortunately, many other Senate Republicans failed to understand that the vote for cloture  today was metaphorically the final vote. As the bill moves forward now, the Democratic majority in the Senate is in complete control, requiring only a simple majority to send a bill back to the House that fully funds Obamacare. And, then simple majority was invoked about an hour later to pass an amendment funding ObamaCare, and to then pass the continuing resolution with a simple majority.

The bill will now return to the House. The House must pass a bill, and send it back to the Senate. This morning, Sen. Cruz reiterated that when the bill returns to the Senate, “I hope that all 46 Republicans are united against ObamaCare and standing with the American people.”

Make no mistake: a vote in support of cloture  today means that those Republicans were perfectly accepting of allowing Leader Reid to provide the funding mechanism to destroy our healthcare, our jobs and one-sixth of the American economy. source – Washington Times