Libyan rebels sold Hizballah and Hamas thousands of chemical shells from the stocks of mustard and nerve gas that fell into rebel hands when they overran Muammar Qaddafi’s military... 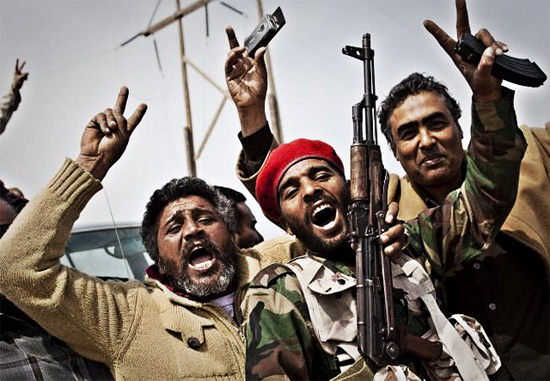 Houston, we have a problem

With so much uncertainty in Libya, one thing is for sure – both Hamas and Hezbollah are much better armed with weapons to attack Israel and the United States. Looks like the Libyan rebels have just sold them piles of chemical weapons, as well as anti-air missiles.

“Senior Libyan rebel “officers” sold Hizballah and Hamas thousands of chemical shells from the stocks of mustard and nerve gas that fell into rebel hands when they overran Muammar Qaddafi’s military facilities in and around Benghazi, debkafile’s exclusive military and intelligence sources report. Word of the capture touched off a scramble in Tehran and among the terrorist groups it sponsors to get hold of their first unconventional weapons.

According to our sources, the rebels offloaded at least 2,000 artillery shells carrying mustard gas and 1,200 nerve gas shells for cash payment amounting to several million dollars.

US and Israeli intelligence agencies have tracked the WMD consignments from eastern Libya as far as Sudan in convoys secured by Iranian agents and Hizballah and Hamas guards. They are not believed to have reached their destinations in Lebanon and the Gaza Strip, apparently waiting for an opportunity to get their deadly freights through without the US or Israel attacking and destroying them. It is also not clear whether the shells and gases were assembled upon delivery or were travelling in separate containers. Our sources report that some of the poison gas may be intended not only for artillery use but also for drones which Hizballah recently acquired from Iran.

Tehran threw its support behind the anti-Qaddafi rebels because of this unique opportunity to get hold of the Libyan ruler’s stock of poison gas after it fell into opposition hands and arm Hizballah and Hamas with unconventional weapons without Iran being implicated in the transaction. Shortly after the uprising began in the third week of February, a secret Iranian delegation arrived in Benghazi. Its members met rebel chiefs, some of them deserters from the Libyan army, and clinched the deal for purchasing the entire stock of poison gas stock and the price.

The rebels threw in a quantity of various types of anti-air missiles. Hizballah and Hamas purchasing missions arrived in the first week of March to finalize the deal and arrange the means of delivery.

The first authoritative American source to refer to a Hizballah presence in Benghazi was the commander of US NATO forces Adm. James Stavridis. When he addressed a US Senate committee on Tuesday, March 29, he spoke of “telltale signs of the presence of Islamic insurgents led by Al-Qaeda and Hizballah” on the rebel side of the Libyan war. He did not disclose what they were doing there.” source – DEBKAfile