Rahm Emanuel was elected mayor of Chicago on Tuesday by building a coalition so broad-based, he says it empowers him to confront Chicago’s daunting problems. “What makes this victory... 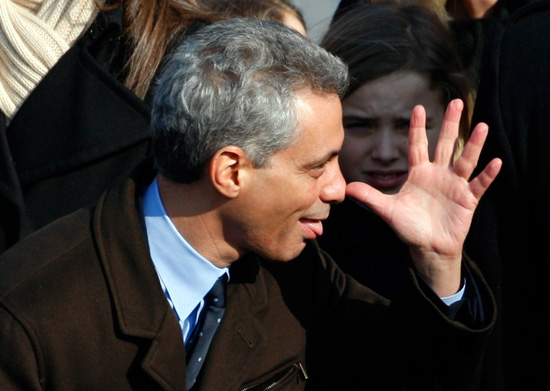 Looking up at the bottom of the barrel

Remember when you were a kid and you went camping? At some point, some friend of yours lifted up a slimy, moss covered rock and made you stare at the crawling, disgusting creatures that inhabited that nether world of goo and darkness. Well, Chicago is the rock, and Rahm Emanuel the slime gyrating around underneath. I wonder how much graft, greed, corruption and string pulling it took to rig this election and further cement Chicago’s reputation for having the crookedest, most corrupt leaders this country can produce.

Like Al Capone before him, Rahm Emanuel will now rule Chicago.

“Rahm Emanuel was elected mayor of Chicago on Tuesday by building a coalition so broad-based, he says it empowers him to confront Chicago’s daunting problems. “What makes this victory most gratifying is that it was built on votes from every corner of the city from people who believe that a common set of challenges must be met with a common purpose,” Emanuel told cheering fans at Plumbers Hall on the Near West Side. His wife and three children stood with him. “You sure know how to make a guy feel at home,” Emanuel said, now free to laugh about the residency challenge that almost kept him off the ballot.

Emanuel scored a runaway victory, taking 55 percent of the vote to Gery Chico’s 24 percent. The former White House chief of staff’s margin of victory was big enough to avoid a run-off and establish an indisputable mandate from just about every geographic and ethnic bloc in Chicago. Emanuel won 40 wards to Chico’s 10. Emanuel won all the predominantly black wards. Emanuel appeared to be the “consensus candidate” of the black community, garnering a larger share of the votes than former Sen. Carol Moseley Braun, who came in fourth behind City Clerk Miguel del Valle. Braun had just under 9 percent, del Valle just over 9 percent.” source – Sun Times

Once, when a pollster made him angry, Rahm sent him a dead fish in a box, ala The Godfather, implying that if he didn’t cooperate, that he too would be “swimming with the fishes”. So here now are a few quotes from people about the man himself, so you can see what an awesome, classy guy he truly is.

“We joke that someone should open a special trauma ward in Washington for people who’ve worked for Rahm.”
— Jose Cerda, former Clinton staffer, on the notoriously enormous demands that Emanuel puts on his staff (Rolling Stone, Oct. 2, 2006)

“I wake up some mornings hating me too.”
— On his reputation as a Democratic attack dog (Chicago Tribune, Nov. 12, 2006)

The most infamous Rahmbo story of them all is the one that begins with the dinner the night after Bill Clinton was elected in 1992. Among those present at the dinner table was ABC News anchor George Stephanopoulos, who watched while an overwrought and clearly exhausted Emanuel began ranting at a long list of Clinton “enemies.” As he shouted each name, he stabbed the table with his steak knife: “Nat Landow! Dead! Cliff Jackson! Dead!” Apparently, others joined in.” source – Foreign Policy