A celebration in San Francisco’s streets over the Giants’ World Series victory turned raucous and violent in some areas with people injured by gunfire, officers hurt by bottles thrown... 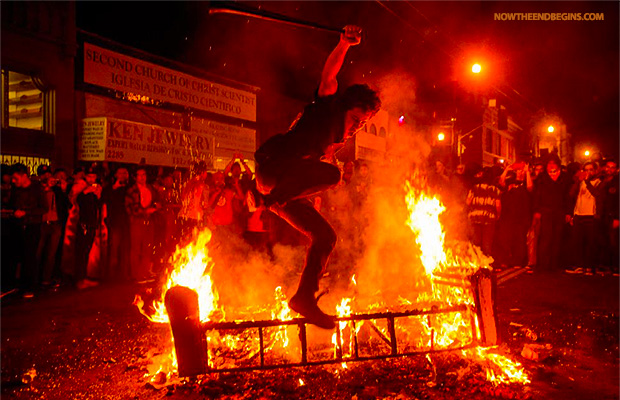 “This know also, that in the last days perilous times shall come.” 2 Timothy 3:1

Our society is rapidly devolving, spiraling down at an astonishing rate of speed. After the San Francisco Giants won the World Series, a different spirit began to rise which quickly became dark, angry and violent. People were shot, people were stabbed, the streets set on fire in absolute rage by gangs of sports fans who behaved more like demon-possessed wild animals than like human beings. This wasn’t a protest about police brutality, or racism, or about any thing else other than sheer, unbridled lunacy. And remember, this was done by the fans of the winning team.

America is becoming a cold, angry, unrecognizable place. The light of the Gospel is growing fainter and fainter in these last moments of the Church Age right before the Rapture. This story and these photos are just a tiny taste of what life will be like in the Tribulation. The Spirit of Antichrist. Avoid it all and get saved, time is running out…

SAN FRANCISCO — A celebration in San Francisco’s streets over the Giants’ World Series victory turned raucous and violent in some areas with people injured by gunfire, officers hurt by bottles thrown by revelers, and police making arrests.

The partying unfolded peacefully with fans gathering in the streets and uncorking champagne, lighting bonfires, dancing in a mosh pit and hugging strangers on Wednesday night as their team scored its third series win in as many championship appearances, a triumph all the more gratifying by its arrival at the end of a seventh, winner-takes-all 3-2 game.

But in some areas, the atmosphere grew rowdier as the night wore on.

Violence left three people injured in separate incidents, two by gunshots and one in a stabbing, police spokesman officer Gordon Shyy said. The gunshot victims’ wounds were non life-threatening, but he didn’t have information on the stabbing. 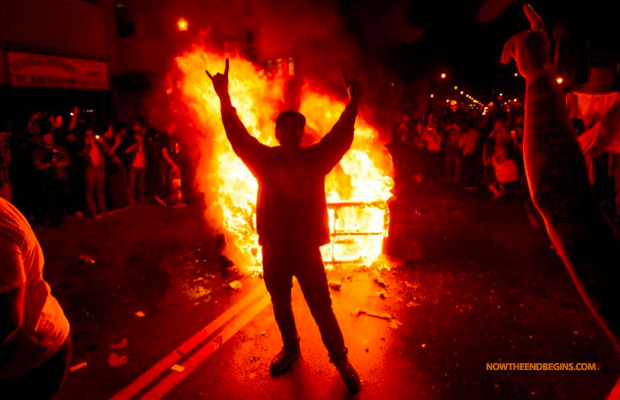 Giant’s fan flashes the sign of Satan in the midst of a street set on fire during the World Series celebrations in San Francisco.

Shortly after the celebrating began, Shyy said officers made “a handful of arrests” as fans filled the streets and blocked traffic around the Civic Center, in the Mission District and on Market Street within walking distance of AT&T Park. No updated arrest figure was available later.

“Police personnel were assaulted with bottles on Market Street and Mission district. Officers in the Southern district were also struck with bottles,”