In a video clip released last week entitled “Do You Love Santa Claus,” Cameron stated that “maybe someone like Santa Claus is actually on our team.”... 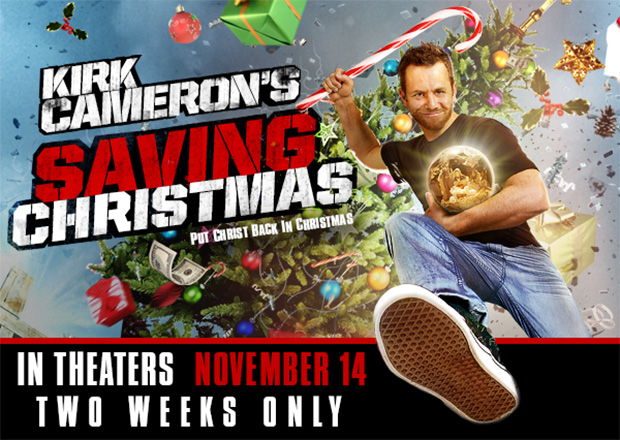 Was Santa Claus a Christian? A ‘defender of the faith’? Is this reason to sit on the lap of the bearded man at the mall who “knows if you’ve been naughty or nice”?

That is what Kirk Cameron is claiming as proof why Christians should celebrate Christmas in a new documentary that opens this Friday in theaters across the country—an assertion that is raising concerns over Cameron’s confusion of Roman Catholicism with Christianity.

Cameron, best known for his role as Mike Seaver on the 80’s TV sitcom “Growing Pains” and films such as “Fireproof” and “Left Behind,” has been promoting his new film “Saving Christmas,” in which the actor seeks to “keep Christ in Christmas,” stating that some holiday traditions aren’t so bad or pagan after all.

After recently asserting that Christians should celebrate Halloween, in a video clip released last week entitled “Do You Love Santa Claus,” Cameron stated that “maybe someone like Santa Claus is actually on our team.” He then released a second video providing the history of the figure of Santa Claus, who was actually the Roman Catholic Bishop Nicholas of Myra, Turkey under Pope Sylvester I.

“He was a devout Christian,” Cameron states, but not noting Nicholas’ Roman Catholic faith. “He was left with a large sum of money when his parents died, and be became famous for his kindness toward the poor and his generous giving of gifts to children.”

“He was there at the Council of Nicaea in AD 325, one of the most important events in Church history,” he continues, referring to the first ecumenical conference under Constantine. “The Council of Nicaea ended up producing what is known today as the Nicene Creed, a profession of faith used by churches all around the world. The creed affirmed the deity of Christ and the three persons of the trinity.

Cameron said that the use of Santa Claus, who had developed from the person of St. Nicholas, was therefore not so bad after all.

“So the guy that many of us think is distracting from the birth of the Christ child, is really the defender of the faith you and I want to be,” he asserted. “So now that you know who the real Santa Claus is, you want to take a picture with him at the mall this Christmas? I do.”

“Born again Christians should not be joining Roman Catholics in any spiritual enterprise or activity,” Mike Gendron of Proclaiming the Gospel Ministries told Christian News Network. “Paul called us to remain separate from unbelievers who embrace a false gospel. Light and darkness have nothing in common and there is no agreement between the temple of God and idols (2 Cor. 6:14-18).”But some do not agree with Cameron’s assertions, and believe that Christians should stay away from joining with the Roman Catholic Church or honoring its icons.

“I believe Kirk knows that Roman Catholicism is a divisive issue among evangelicals and purposefully avoids it,” he said when asked about why he thinks Cameron might have failed to mention that Nicholas was Catholic. “The fact that the RCC ‘made’ Nicholas a saint should be a red flag to anyone who knows only God can convert sinners to saints by the sovereign work of His Spirit.”