The four Republicans who voted against the initiative were Sen. Kevin Grantham, Sen. Kent Lambert, Sen. Laura Woods, and Sen. Jerry Sonnenberg. On Cruz’s campaign website, Sens. Woods, Grantham, and Lambert are all listed as Cruz supporters and as declared members of Cruz’s “Colorado Leadership team.”

Social media posts, along with Cruz’s campaign website, reveal that Sen. Ted Cruz supporters in the Colorado Republican Party were responsible for crushing an effort to give Colorado the ability to vote in a state primary.

EDITOR’S NOTE: In an amazing coincidence, the Colorado lawmakers who decided to not allow the people of Colorado to vote in the GOP primary election are also Ted Cruz delegates. The people of Colorado should be incensed at having their vote stolen and their voices silenced. Ted Cruz didn’t win Colorado because he had a better ‘ground game’, he won Colorado because his people on the inside conspired to steal it for him. Donald Trump was right.

In May of 2015, four Colorado Senate Republicans killed an initiative “to create a presidential primary in 2016,” reported the Denver Post. “Under the bill, Colorado would have held a presidential primary in March that ran parallel with the state’s complicated caucus system… when it came before the Senate Appropriations Committee, four Republicans voted to kill the bill with three Democrats supporting it.”

The four Republicans who voted against the initiative were Sen. Kevin Grantham, Sen. Kent Lambert, Sen. Laura Woods, and Sen. Jerry Sonnenberg. On Cruz’s campaign website, Sens. Woods, Grantham, and Lambert are all listed as Cruz supporters and as declared members of Cruz’s “Colorado Leadership team.” 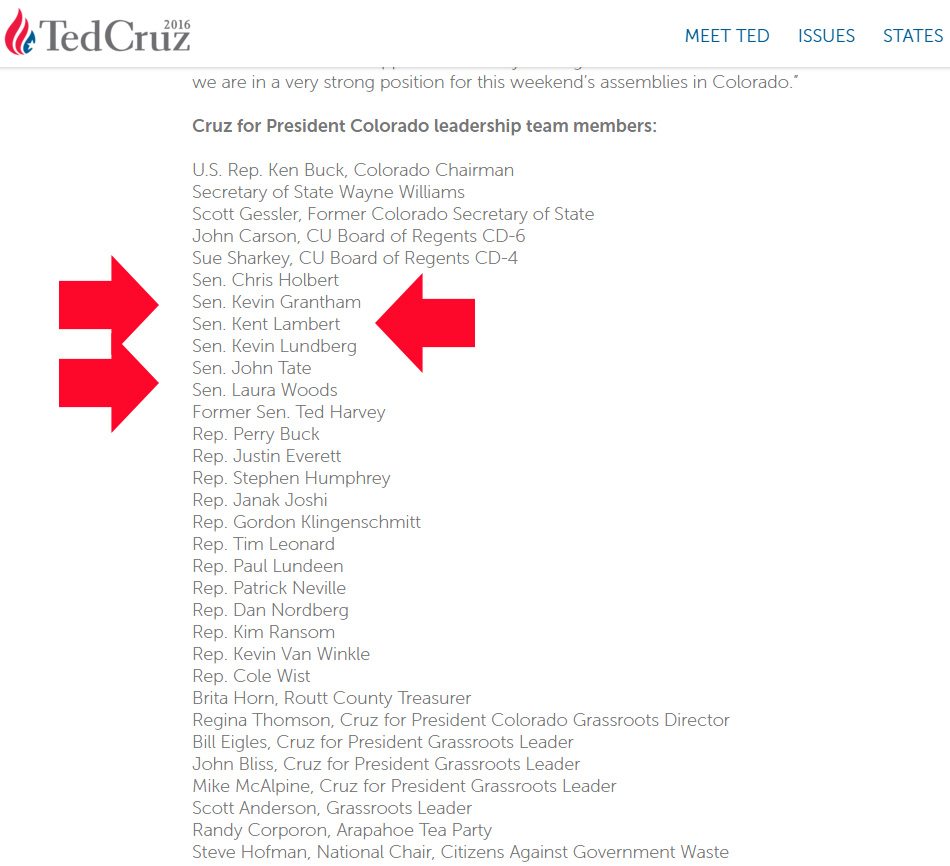 “I am honored to have the support of so many courageous conservatives in Colorado,” Ted Cruz said about his so-called leadership team in early April. “With our incredible team we are in a very strong position for this weekend’s assemblies in Colorado.”

At the time, the editors of the Denver Post seemed perplexed by Grantham’s decision not to support the primary election initiative. In a May 2015 editorial titled, “Colorado GOP flubs chance for 2016 presidential primary,” the editors write: “What? Grantham was a sponsor of the bill. If he thought the bill made enough sense to put his name on it, why wouldn’t he think it should be passed out of committee?”

The editors go on to suggest that Party leaders may have had “other agendas that remain undisclosed” for rejecting a primary election of the people. The editors write: an “opportunity to move Colorado out of its antiquated presidential caucuses has been lost through miscommunication, timidity or, perhaps, because of other agendas that remain undisclosed.” They continue, “The caucuses guarantee lackluster voter participation and the disproportionate influence of activists on both ends of the political spectrum who are not representative of the parties’ mainstream. Some romanticize the caucus system as the purest form of grass-roots democracy, but that’s only accurate if your idea of democracy involves excruciatingly low turnout — by design.”