The United States and other world powers will help to teach Iran how to thwart and detect threats to its nuclear program, according to the parameters of a deal... 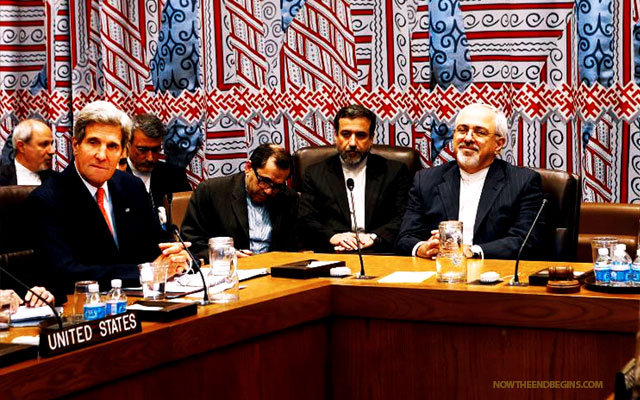 The United States and other world powers will help to teach Iran how to thwart and detect threats to its nuclear program, according to the parameters of a deal reached Tuesday to rein in Iran’s contested nuclear program.

EDITOR’S NOTE: However bad you might have thought Obama’s nuclear deal with Iran was, it just got ten times worse. Today it was revealed that Obama has pledged the United States military to protect Iranian nuclear facilities against air strikes from Israel and any other nation like Saudi Arabia that wants to stop them from getting a nuclear weapon. The United States and its partners have just become the international protectors of the Iranian nuclear program.

Under the terms of a deal that provides Iran billions of dollars in sanctions relief, the United States and global powers will cooperate to help teach Iran how to manage its nuclear infrastructure, which will largely remain in tact under the deal.

The United States and its partners have just become the international protectors of the Iranian nuclear program.

Senior Iranian officials, including the country’s president, celebrated the deal as a victory for the country. Iran’s state controlled media quoted President Hassan Rouhani as saying that the deal will “remove all sanctions while maintaining [Tehran’s] nuclear program and nuclear progress.”

In what is being viewed as a new development, European countries and potentially the United States agreed to “cooperate with Iran on the implementation of nuclear security guidelines and best practices,” according to a copy of the agreement furnished by both the Russians and Iranians.

This will include “training courses and workshops to strengthen Iran’s ability to prevent, protect and respond to nuclear security threats to nuclear facilities and systems as well as to enable effective and sustainable nuclear security and physical protection systems,” according to the text.

Additional “training and workshops” would work to “strengthen Iran’s ability to protect against, and respond to nuclear security threats, including sabotage, as well as to enable effective and sustainable nuclear security and physical protection systems,” the text states.

The language was viewed as disturbing by analysts and experts who said such cooperation could help protect Iran against efforts by the Israelis or other countries to sabotage the Islamic Republic’s nuclear program in the future.

In addition to teaching Iran how to protect its nuclear infrastructure, world powers pledge in the agreement to help Iran construct next-generation centrifuges—the machines that enrich uranium—at its once-secret nuclear site in Fordow, where Iran has been suspected of housing a weapons program. source