China Barks At United States, ‘Stay Out Of Our Waters!’ (VIDEO)

China said on Friday it would not stand for violations of its territorial waters in the name of freedom of navigation, as the United States considers sailing warships close... 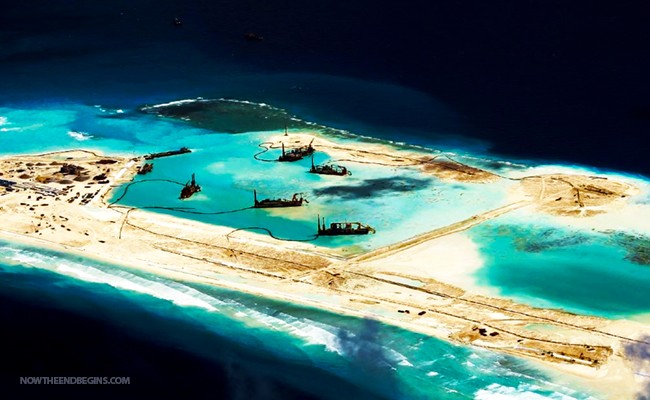 China said on Friday it would not stand for violations of its territorial waters in the name of freedom of navigation, as the United States considers sailing warships close to China’s artificial islands in the South China Sea.

EDITOR’S NOTE: One of the dreaded fruits of the Obama presidency is a world in which the United States is no longer feared by other nations like Iran, Russia and China just to name a few. Russia is having their way with Syria and they laugh at whatever Obama has to say because they know he won’t do anything. Iran openly mocks the United States and call daily for our destruction. Now China is piling on, telling the US to stay out of territories that don’t even actually belong to them. When the world no longer fears the “big dog”, that means it’s time for a “new dog”. In this case, three of them to be precise. Exactly as the Bible prophesied it would be in the end of time.

A U.S. defense official told Reuters the United States was mulling sending ships within the next two weeks to waters inside the 12-nautical-mile zones that China claims as territory around islands it has built in the Spratly island chain.

The pictures show the amazing transformation, over the past year or so, of submerged atolls into sizeable islands with harbours, roads, container depots, workers’ dormitories and even cement plants. The reclamation activities have been documented periodically since early 2014 by Vietnamese bloggers, the Philippines foreign ministry, defense publisher IHS Janes, and, most recently, the Washington-based CSIS’s Asia Maritime Transparency Initiative.

China claims most of the South China Sea, though Washington has signaled it does not recognize Beijing’s territorial claims and that the U.S. navy will continue to operate wherever international law allows.

“We will never allow any country to violate China’s territorial waters and airspace in the Spratly Islands, in the name of protecting freedom of navigation and overflight,” Foreign Ministry spokeswoman Hua Chunying told a regular news briefing.

“We urge the related parties not to take any provocative actions, and genuinely take a responsible stance on regional peace and stability,” Hua said in response to a question about possible U.S. patrols.

The United States and its allies in Asia, including Japan, have called on Beijing to halt construction on its man-made islands and the issue is central to increasingly tense U.S.-China relations.

Chinese President Xi Jinping has said China has no intention of militarizing the islands, but Washington analysts and U.S. officials say Beijing has already begun creating military facilities there.

Admiral Harry Harris, commander of U.S. forces in the Pacific, told the Aspen Security Forum in July that China was building hangars on one of the reefs – Fiery Cross – that appeared to be for tactical fighter aircraft.

In May, the Chinese navy issued eight warnings to the crew of a U.S. P8-A Poseidon surveillance aircraft that flew near China’s artificial islands, according to CNN, which was aboard the U.S. aircraft.

The Philippines, Vietnam, Malaysia, Brunei and Taiwan have overlapping claims in the South China Sea. source