Dan Cathy says that 'Chick-fil-A made no such concessions, and we remain true to who we are and who we have been."... 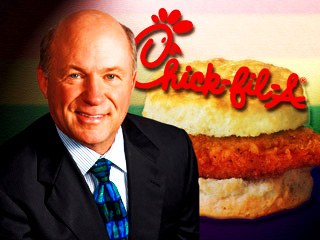 ATLANTA (BP) — Following reports that Chick-fil-A had agreed to stop funding certain traditional family groups in order to get approval for a new Chicago restaurant, company President Dan Cathy said Friday the restaurant made no concessions and “we remain true to who we are.”

Cathy’s statement, posted on Mike Huckabee’s website, came one day after the company released its own statement saying that its corporate giving has “been mischaracterized” for many months and that it will continue to fund programs that “strengthen and enrich marriages.”

Said Cathy, “There continues to be erroneous implications in the media that Chick-fil-A changed our practices and priorities in order to obtain permission for a new restaurant in Chicago. That is incorrect. Chick-fil-A made no such concessions, and we remain true to who we are and who we have been.”

Focus on the Family President Jim Daly — whose organization supposedly had been de-funded by Chick-fil-A — also has spoken up for the company. And gay activist groups — who initially applauded Chick-fil-A’s supposed move — now are criticizing the restaurant once again.

Chick-fil-A was facing a backlash after Chicago Alderman Joe Moreno and an Illinois gay activist group announced in Wednesday (Sept. 19) news reports that Chick-fil-A had agreed to no longer fund groups opposed to gay marriage, such as Focus on the Family. That alleged agreement led Moreno — who had criticized Chick-fil-A during the summer for its president’s comments affirming the traditional marriage — to stop blocking a new franchise from being built in his ward. In comments to the Chicago Tribune, Moreno called it a “big win.”

The problem? Chick-fil-A’s base of support remains largely in conservative states, and those customers hardly consider Focus on the Family and other groups “anti-gay.” Many felt Chick-fil-A had caved.

Earlier this summer, hundreds of thousands of customers took part in Chick-fil-A Appreciation after company president Dan Cathy was criticized for comments supporting the biblical definition of marriage. Chick-fil-A’s stance on values is well-known: It is closed on Sundays, and its corporate statement includes the desire to “glorify God.”

In the 24 hours after the story out of Chicago broke, Chick-fil-A’s Facebook page was flooded with criticism of the new policy.

“I’m disgusted that your faith is so weak,” one person wrote. “You sure raked in the bucks on Chick Fil A day huh? So when do you start opening on Sunday? ‘As for me and my house, we will serve the Lord'”

Chick-fil-A released a statement Thursday (Sept. 20), saying that “for many months now, Chick-fil-A’s corporate giving has been mischaracterized.”

“And while our sincere intent has been to remain out of this political and social debate, events from Chicago this week have once again resulted in questions around our giving,” the statement said. “For that reason, we want to provide some context and clarity around who we are, what we believe and our priorities in relation to corporate giving.

“A part of our corporate commitment is to be responsible stewards of all that God has entrusted to us. Because of this commitment, Chick-fil-A’s giving heritage is focused on programs that educate youth, strengthen families and enrich marriages, and support communities. We will continue to focus our giving in those areas. Our intent is not to support political or social agendas.”

The company also released a document that had been referenced in the media called “Chick-fil-A: Who We Are.” In it, the company repeats language from this summer and says its tradition is to “treat every person with honor, dignity and respect — regardless of their belief, race, creed, sexual orientation or gender.”

The Who We Are document also says Chick-fil-A “supports programs and marriage retreats to help strengthen and enrich marriages,” which more than 4,000 couples attend annually.

The document did not address whether Chick-fil-A has indeed agreed to stop funding certain groups, and if so, which groups. It’s also unclear how the company’s policy will appease gay activist groups, because marriage enrichment programs often are traditional-focused and biblically based and typically define marriage as between a man and a woman.

“The truth is, Chick-fil-A is still donating money to anti-LGBT groups — they are just, once again, using the language of their mission statement to deflect attention,” a statement on HRC’s website said. “… What that language essentially means is that they will continue to support groups with rabidly anti-LGBT agendas, but they certainly would never want anyone to think that their support should be taken as an endorsement of any particular political agenda.”

“Dan and Bubba Cathy are my Christian brothers and good friends. They and their company have long shared Focus on the Family’s commitment to helping build strong and thriving families — and they have in no way deviated from that deeply held and biblically inspired passion while working with the city of Chicago to open Chick-fil-A restaurants there,” Daly said.

“I feel bad the Cathys are having once again to endure media accounts mischaracterizing their values and charitable efforts — and, unfortunately, I know how they feel. Focus on the Family has for 35 years been dedicated to saving and strengthening marriages, helping couples raise happy, resilient kids and encouraging and empowering men and women to advocate for God’s truth with Christ’s heart. And still, in stories like some of those about Chick-fil-A’s efforts to expand in Chicago, we are described as being ‘hateful’ toward certain groups of people.

“How is an organization that helps save one marriage every six minutes and helps parents navigate through a crisis involving their children every 90 seconds deemed ‘anti’ anything but ‘anti-family breakdown’?” Daly concluded. “That’s a question we would hope the media begins to ask with more regularity of those who disagree with us and with Chick-fil-A for bringing our Christian values to bear on the work we do in the public square.”

Gay groups also were upset that Dan Cathy was helping raise money for traditional groups. The Advocate gay website took issue with Cathy taking part Tuesday (Sept. 18) in a fundraiser known as the WinShape Ride for the Family. The money, the Advocate said, will benefit the Marriage and Family Foundation, which it said funds the Marriage CoMission, a traditional group.

“Granted, the group’s sole focus isn’t on same-sex marriage,” the Advocate reported. “The CoMission emphasizes lowering the divorce rate and making couples more satisfied in their marriages, for example. But even in those instances, the group has made clear it’s worried only about heterosexuals being happy in their marriages and avoiding divorce.” source – Baptist Press