The president of Chick-fil-A, the fast food chain with more than 1,600 restaurants and $4 billion in revenue, has come out against same-sex marriage. "We know that it might... 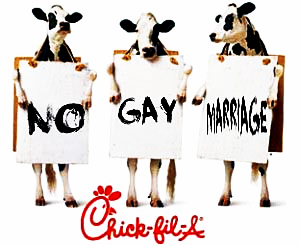 The WinShape Foundation—Chick-fil-A's charitable arm—donated more than $1.1 million between 2003 and 2008 to anti-LGBT groups, doubling that amount to $2 million in 2009.
by Geoffrey Grider July 18, 2012
NOW THE END BEGINS SHARE:

The president of Chick-fil-A, the fast food chain with more than 1,600 restaurants and $4 billion in revenue, has come out against same-sex marriage.

The WinShape Foundation—Chick-fil-A’s charitable arm—donated more than $1.1 million between 2003 and 2008 to anti-LGBT groups, doubling that amount to $2 million in 2009.

“I think we are inviting God’s judgment on our nation when we shake our fist at him and say, ‘We know better than you as to what constitutes a marriage,'” Dan Cathy, the company’s president and chief operating officer, said in a recent radio interview. “I pray God’s mercy on our generation that has such a prideful, arrogant attitude to think that we have the audacity to define what marriage is about.”

In an interview with the Baptist Press published this week, Cathy doubled down on his stance against same-sex unions.

“Guilty as charged,” Cathy said. “We are very much supportive of the family—the biblical definition of the family unit. We are a family-owned business, a family-led business, and we are married to our first wives. We give God thanks for that.”

“We know that it might not be popular with everyone,” he added, “but thank the Lord, we live in a country where we can share our values and operate on biblical principles.”

The company, founded by Dan’s father, Truett Cathy, in 1946, has a history of “unapologetic social conservatism,” as the Daily Caller put it. All 1,608 of its stores are closed on Sundays, a day of rest for most Christians.

According to Queerty.com, the WinShape Foundation—Chick-fil-A’s charitable arm—donated more than $1.1 million between 2003 and 2008 to anti-LGBT groups, doubling that amount to $2 million in 2009.

Earlier this year, students at Northeastern University protested a proposal to put a Chick-fil-A on its Boston campus because of the company’s history of supporting anti-gay organizations. The school abandoned its plan. source – Yahoo News