Did Chick-Fil-A Cave In To Pressure From LGBT Groups?

This is a HOTLY contested topic of whether or not CFA stopped supporting anti-gay groups. The official statement from CFA cna be interpreted in a variety of ways,... 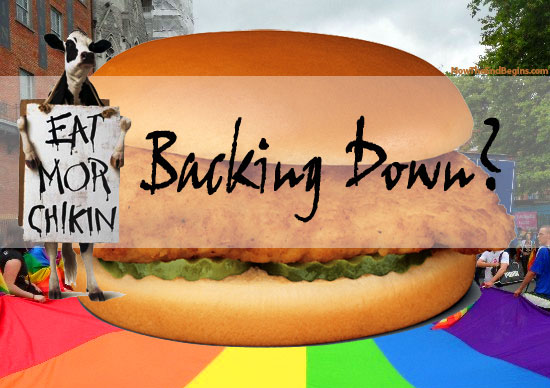 DISCLAIMER: This is a HOTLY contested topic of whether or not CFA stopped supporting anti-gay groups. The official statement from CFA cna be interpreted in a variety of ways, pro and con. Focus On the Family says Chick-Fil_a has changed nothing. But Chick-Fil-A is refusing to answer any questions on the topic. So which is it? You decide! Here is what Focus On The Family Says:

“Some people were quick to criticize the 66-year-old chicken chain for “caving” to political pressure. Focus on the Family President Jim Daly said that’s not what happened. “Dan and Bubba Cathy are my Christian brothers and good friends. They and their company have long shared Focus on the Family’s commitment to helping build strong and thriving families — and they have in no way deviated from that deeply held and biblically inspired passion while working with the city of Chicago to open Chick-fil-A restaurants there,” Daly said. read more from Citizen Link

From Daily Caller: Chick-fil-A is not responding to a recent claim by an Illinois gay rights group that the company “will no longer give money to anti-gay organizations.” Company spokesman Jerry Johnston told The Daily Caller that Chick-fil-A is “not offering any response to the press release distributed by the Civil Rights Agenda other than the statement we originally released in July,” which reiterated that the fast-food chain treats all people with respect and is a family-owned business founded on “biblically-based principles.”

On Tuesday the advocacy group The Civil Rights Agenda issued a press release that claimed Chick-fil-A had ended its contributions — through its charity arm, The WinShape Foundation — to groups that oppose same-sex marriage.

The claim is based on Chicago Alderman Proco “Joe” Moreno’s negotiations with the restaurant chain and a letter he received from Chick-fil-A’s senior director of real estate.

“The WinShape Foundations is now taking a much closer look at the organizations it considers helping, and in that process will remain true to its stated philosophy of not supporting organizations with political agendas,” the letter read, according to TCRA, which added that company executives reiterated a promise to not fund “anti-gay organizations.”

TCRA said Chick-fil-A also sent a memo to franchisees and stakeholders that was placed in the company’s official “Chick-fil-A: Who We Are” guide, which says the company will “treat every person with honor, dignity and respect-regardless of their beliefs, race, creed, sexual orientation and gender” and that their “intent is not to engage in political or social debates.”

According to CBS Chicago, Moreno, who previously would not allow Chick-fil-A to open a franchise in his ward, will now allow the location to go forward given this new development.

The fast-food company came under fire this summer for comments Chick-fil-A President Dan Cathy made against same-sex marriage. The comments resulted in demonstrations both for and against the business.

The official statement from Chick-Fil-A:

Chick-fil-A is a family-owned and family-led company serving the communities in which it operates. From the day Truett Cathy started the company, he began applying biblically-based principles to managing his business. For example, we believe that closing on Sundays, operating debt-free and devoting a percentage of our profits back to our communities are what make us a stronger company and Chick-fil-A family.

The Chick-fil-A culture and service tradition in our restaurants is to treat every person with honor, dignity and respect –regardless of their belief, race, creed, sexual orientation or gender. We will continue this tradition in the over 1,600 Restaurants run by independent Owner/Operators. Going forward, our intent is to leave the policy debate over same-sex marriage to the government and political arena.

Our mission is simple: to serve great food, provide genuine hospitality and have a positive influence on all who come in contact with Chick-fil-A. source – Daily Caller