Ignoring Nation of Islam leader Louis Farrakhan’s history of anti-Semitic remarks, Mayor Rahm Emanuel on Wednesday welcomed him while at the same time rejecting the wholesome, family value of... 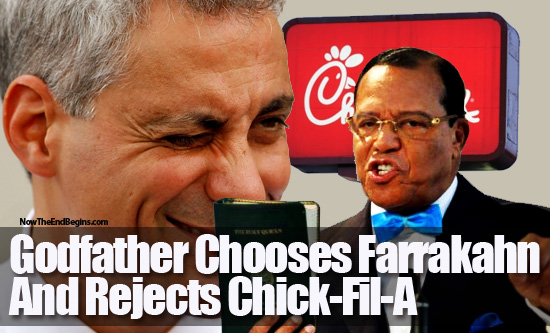 In two separate stories that are running on the same day, we see Chicago regime boss Rahm “Godfather” Emanuel welcoming with open arms the very anti-Semitic Louis Farrakahn, while rejecting Christian-based, traditional marriage supporting Chick-fil-a. Is it just us, or is there something wrong with this picture??

Ignoring Nation of Islam leader Louis Farrakhan’s history of anti-Semitic remarks, Mayor Rahm Emanuel on Wednesday welcomed the army of men dispatched to the streets by Farrakhan to stop the violence in Chicago neighborhoods.

Ald. Debra Silverstein (50th), an Orthodox Jew, has said it’s good that Farrakhan is “helping” in the fight against crime, “but it doesn’t eradicate the comments that he’s made about the Jewish community.”

Emanuel offered no such caveat. Although Farrakhan has a history of making anti-Semitic statements, Chicago’s first Jewish mayor has no interest in revisiting that controversy.

He’s more concerned about reducing a 40 percent surge in Chicago homicides that’s become a media obsession and threatens to undermine his efforts to market Chicago to international tourists.

The anti-gay views openly espoused by the president of a fast food chain specializing in chicken sandwiches have run afoul of Mayor Rahm Emanuel and a local alderman, who are determined to block Chick-fil-A from expanding in Chicago.

“Chick-fil-A’s values are not Chicago values. They’re not respectful of our residents, our neighbors and our family members. And if you’re gonna be part of the Chicago community, you should reflect Chicago values,” Emanuel said Wednesday.

“What the CEO has said as it relates to gay marriage and gay couples is not what I believe, but more importantly, it’s not what the people of Chicago believe. We just passed legislation as it relates to civil union and my goal and my hope … is that we now move on recognizing gay marriage. I do not believe that the CEO’s comments … reflects who we are as a city.”

“Same sex marriage, same-sex couples — that’s the civil rights fight of our time. To have those discriminatory policies from the top down is just not something that we’re open to. …We want responsible businesses,” Moreno said. source – Sun Times