Controversial televangelist Benny Hinn has claimed in a message that the "greatest wealth transfer in human history" is approaching, and asked people to sow money into his ministry as... 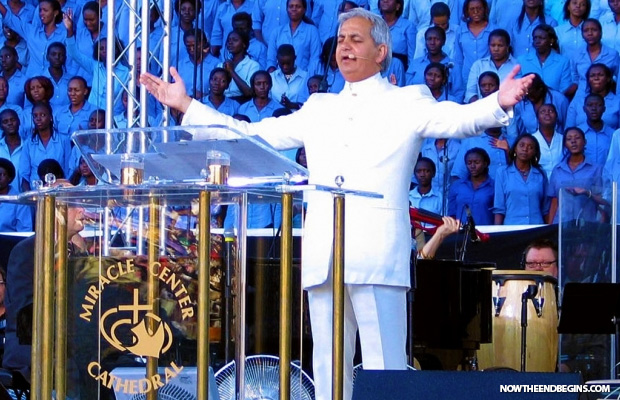 Controversial televangelist Benny Hinn has claimed in a message that the “greatest wealth transfer in human history” is approaching, and asked people to sow money into his ministry as he prepares for a new world tour.

“The prophets prophesy falsely, and the priests bear rule by their means; and my people love to have it so: and what will ye do in the end thereof?” Jeremiah 5:31 (KJV)

Benny Hinn is the Amway of the religion business. He wants you to sign up to buy his merchandise on a regular basis, and he wants you to get your friends to do the same. All the while making great and lofty promises about the “amazing lifestyle” you will have if you will only keep those donation checks coming in. If you removed all the references to money from his website, all you would be left with would be the Contact Us page. But even that page is used to beg for money. Benny Hinn is a fraud, a charlatan in the classic Elmer Gantry mold. Now comes his latest prophecy about a “global wealth transfer” that will change the world.

“It is estimated by many leading financial analysts that during the next three decades more than $16 trillion will transfer from one generation to the next,” Hinn said on his website.

“As I’ve been sharing with you in recent months, the Word of God clearly tells us that we are coming into a time when we will see a glorious transfer of wealth for the preaching of the Gospel and for the financing of the end-time harvest,” he continued.

Hinn argued that before each “historic financial blessing,” God asked people for an offering.

“Right before giving them their supernatural wealth transfer, He first asked them to give an offering. Every household was commanded to bring a lamb to sacrifice. Then, after making the sacrifice and applying the blood over the door and on the doorposts, God told them to go and receive the wealth of the Egyptians.”

The televangelist asked people to join him in preparing for this great transfer of wealth, and asked them to “prayerfully sow a sacrificial seed and take an extraordinary step of faith.”

Hinn continued: “I know you may have other plans for that seed, but I’m asking you to seek and obey God as He shows you a divine destiny for that seed. And as you sow it into the Lord’s work, He will get you out of your bondage.” source

Being a Benny Hinn follower is nothing but bondage. False miracle, false prophecies, and pre-arranged fake healings are what you get for your donation dollar to his “ministry”.

Just don’t say that nobody ever warned you.