CBS Complicit In News Coverup Of Rape Of Lara Logan 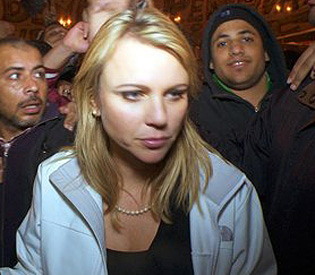 The truth comes out

The other day, NTEB was one of the very first news outlets to bring you the story of the brutal rape of CBS news reporter Lara Logan in Egypt. What is amazing about this story is that, as a reporter for CBS News, Lara Logan’s story was covered-up by CBS. Especially the part where the thugs who raped her were screaming “Jew!, Jew!”, as they held her down and did their despicable deeds to an innocent woman.

“[60 Minutes] correspondent Lara Logan was repeatedly sexually assaulted by thugs yelling, ‘Jew! Jew!’ as she covered the chaotic fall of Egyptian President Hosni Mubarak in Cairo’s main square Friday.” Powerful reporting on an important story. Two problems: It didn’t run until yesterday, and CBS didn’t run it. The quote is from the New York Post. And it was The Wall Street Journal that reported “the separation and assault lasted roughly 20 to 30 minutes.” But CBS? They sat on their own story. For five days, as reporters reveled amid giddy celebrations in Tahrir Square, and as President Obama praised President Obama’s handling of the Egyptian crisis, CBS reported nothing. Only when other media had the story did CBS break the news that its own chief foreign correspondent was the victim of “a brutal and sustained sexual assault.”

Five days of silence — not even “60 Minutes” coverage of the Egypt story. No mention of the “mob of more than 200 people whipped into frenzy” who attacked their own reporter.

How is that not news?

Some women journalists, like WGBH’s Callie Crossley, complain that CBS should never have reported the story, that Logan should be treated like a rape victim in the United States. But I’m with liberal columnist Richard Cohen of The Washington Post: “The sexual assault of a woman in the middle of a public square is a story  . . .  particularly because the crowd in Tahrir Square was almost invariably characterized as friendly and out for nothing but democracy,” Cohen wrote. Watching the same complicit media we all saw, Cohen notes most journalists covered the mobs “as if they were reporting from Times Square on New Year’s Eve, stopping only at putting on a party hat.”

Even CBS’s own statement said Logan was “covering the jubilation” and was attacked “amidst the celebration.”

Having 200 “good guys” gang assault a female reporter while screaming “Jew! Jew!” doesn’t fit the narrative. Is that why CBS sat on the story? Or is it the cultural issue? A rape in a bar is a sex crime. But a pack of political protesters who rape a “Jew” in public is a story about culture.

I would point her to the 2008 broadcast on the Al-Aribiya network of a female (!) lawyer arguing that it’s OK for Muslim men to sexually assault Israeli women, because the Jews have “raped the land.” Or this week’s story of Hena, the 14-year-old Bangladeshi girl raped by a family member, then sentenced to 100 lashes by Muslim authorities for having sex out of wedlock. After 80 lashes, Hena died. There are stories like this — and Logan’s — every week, all with the same cultural denominator.

For the record, Logan isn’t Jewish. And because she’s not Muslim, there’s no possibility she’ll face the lash.” source – Boston Herald